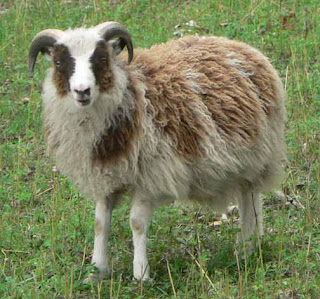 Since I love talking about lambs, and readers love seeing pictures of lambs, that leaves little time for us to talk about the boys, so I decided to devote a whole post to them today. After all, there is nothing as glorious as a gorgeous ram with their flowing fleece and regal horns.

First, I want to show everyone this handsome little boy who was born this spring. If he's not sold soon, he'll be wethered, so I thought I'd let everyone know that he's available. 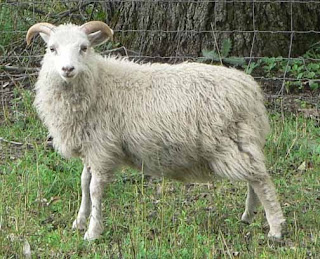 I'm excited to be keeping this not-so-little guy as a new herdsire. I just love his horns and his long, wavy locks. He's out of my ram Willie, who was hit by a car and had to be put down this summer. Willie's fleece was harvested entirely by rooing (similar to shedding), which made it especially soft. I hope this little guy has inherited that ability. His dam is Kitty, which was one of Margaret's sheep before she went away to college. I am not a big fan of white sheep, but I couldn't wether this ram. Now, I just need a name for him. I'd like to somehow incorporate one or both parents' names, but what do Willie Wonka and Kitty have in common? 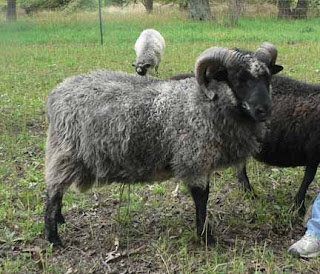 Then there is Rambrandt. His sire was Monet, and Rambrandt is pretty much his clone. Monet was beautiful but mean, so we decided to breed him to all the ewes one year and then butcher him. Well, that was the year the coyotes showed up and killed six of our lambs. The attacks only stopped when we starting spending the night in the pasture, which we continued for six weeks. The coyotes eventually got the last three, and Rambrandt is the only survivor of the lambs from that year, so he's very special. Monet's lambs had the most beautiful fleeces, and we're hoping Rambrandt's will also. His dam is White Feather, and lucky for us, he seems to have inherited her personality more than his sire's. 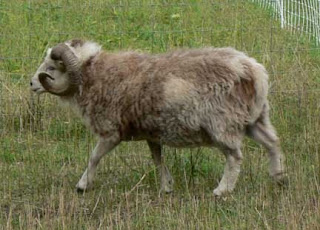 And finally, there is Teddy, who is the sire of about half the flock and grandsire to another quarter, so it's getting harder and harder to set up breeding groups for him. He pretty much has a standing date with White Feather and Majik, my two oldest ewes, but I'm wondering when I should start to think about retiring them since they're both seven now. Long-time blog readers might remember that Teddy survived a coyote attack last year. They ripped a four-inch by six-inch piece of skin off his right side, but it eventually healed. New skin grew, and it even produces wool.

So, there you have it -- the Antiquity Oaks rams. I need to sit down with pedigrees and figure out who will be bred to whom this year and then figure out how to actually keep them separated once the ewes start coming into heat.
Posted by Deborah Niemann at 5:59 AM

deb,
ain't got a place here right now for that cute thing. gotta get all my pig their flu shots today, you know that swine thing and all

That's some nice looking rams you have. Good luck sorting out your breeding groups. It's always a fun time on the farm keeping the boys and girls in their right groups at that time of the year.

Considering that Wilbur (Willie) and Orville Wright made history at Kitty Hawk, how about Kitty Hawk for a name?

Wow, Michelle! that is an amazing connection! I love that theme, but since I already have a Kitty and a Hawk-eye, I'd surely confuse myself. As I was searching the web trying to find the name of the airplane, it clicked that I could just name him Wilbur Wright.

They are all handsome rams!

is the first lamb still available?

Sorry, Danny, we just castrated him two weeks ago. He's still here, but is now a wether.

I sure wish I was ready for my sheep. I'd take him in a minute. I don't have the fence up for their pasture, yet.