Birth and death and orphaned lambs

Shortly after I got home from Iowa yesterday afternoon, Mike came into the house to tell me that White Feather was dead. She was ten years old and one of my first two ewes. Last fall, I had separated her and two other ewes from the flock before breeding season started because I didn't think she needed to be giving birth at age ten. Apparently Storm the ram disagreed, and in April he busted through the wall of the shelter that separated him from the ewes. Although we didn't see him mate anyone, I was pretty sure that the reason he busted through the shelter was because someone was in heat. I had hoped it was his yearling daughter, but apparently it was White Feather.

Four weeks ago on Saturday, we came home from the Homesteading Conference to find two healthy lambs bouncing around the pasture and nursing. White Feather seemed to be in decent shape for her age, although she was anemic. I gave her a dewormer, and put her and the lambs in their own pasture adjacent to the other sheep, so that we could keep an eye on her and give her special feed. We started giving her alfalfa, which I don't normally give sheep, but I figured she needed the higher protein and calcium. But obviously that wasn't enough.

These are our first orphaned lambs, although we did have a bottle ewe five years ago because she got fly strike and was almost dead when we found her. By the time she was strong enough to rejoin the flock, she no longer recognized her mother, so she wound up as a bottle lamb forever. I'm lucky to have Nigerian dwarf goats, which have butterfat around six percent most of the year and even higher butterfat heading into fall. Sheep milk tends to be very rich. I've never seen a percentage on Shetland milk specifically, but I know it is quite high because it was as thick as custard when I made yogurt with it. 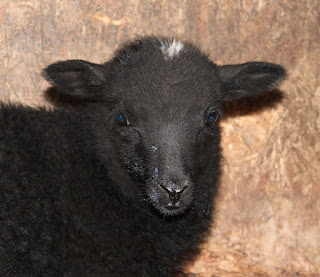 It is also a very good thing that I didn't dry up some of the goats, which I was thinking about doing because of my travel schedule this fall promoting Ecothrifty and my commitment to write a book about goats. Mike has been willing to take over the majority of the milking chores. The lambs will need half a gallon of milk a day, and although we do have some extra every day, we don't have that much extra. So, we have started milking one of the does that had been simply nursing her 7-month-old daughter.

I am truly amazed at how quickly lambs take to the bottle. The little ram didn't exactly suck on the bottle when I put it in his mouth the first time, but he was quietly swallowing all of the milk. The little ewe, on the other hand, was violently opposed to being held and to having the nipple put in her mouth. She threw her head back, splattering milk on both of us. But when I put the nipple back in her mouth, she suddenly started sucking a mile a minute! They each took eight ounces last night with no problem.

This morning went even better. The little ewe came up to me and sniffed the nipple but wouldn't start sucking until I put it in her mouth. She sucked so fast that she started choking, but every time she let go of the nipple to catch her breath, she'd grab it again on her own. The little ram started sucking the second I put the nipple in his mouth and didn't stop until he had drained the whole twelve ounces from the bottle. And this afternoon was even easier. They both opened their mouth and grabbed the nipple on their own, although the little ewe wouldn't do it until I was holding her. I can live with that. We all need a little more lamb cuddling time in our days!

I wish baby goats were this easy to switch to a bottle! The majority of them act like you're trying to poison them the first few times you try to give them a bottle. I can't really imagine switching a one-month-old kid to a bottle so easily.

I am glad that White Feather had twins. They are sad enough without her and cry out often in the barn. It is heartbreaking, but it would be much worse if there were only one lamb. At least they have each other.
Posted by Deborah Niemann at 6:00 PM 5 comments: 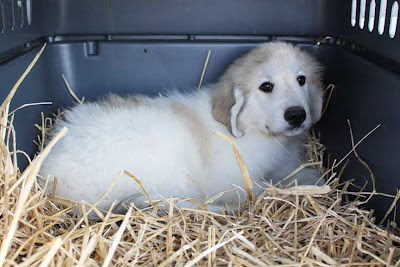 Protecting livestock from predators is an ongoing battle. It seems like we can never quite get control of the situation. We've had an Anatolian shepherd for eight years, and he was doing a great job the first couple years until we started having problems with packs of coyotes. So, we bought four llamas, and a year later, we got two more. They were doing a great job working in pairs on three different parts of the farm until one of them died. He was 18, which is old for a llama, but alas, his partner was then left in a bad situation working alone, and we had our first sheep loss in four years this summer.

And as you might know, eight years old is old for a livestock guardian. I think Sovalye might be feeling the desire to retire too. When that raccoon got into the chicken house a couple of months ago, he walked in when Jonathan called him, and then he walked right back out again. A couple of years ago, he would have taken care of the raccoon in short order.

You might recall that we also have Porter, an English shepherd, and although he is a great guard dog when it comes to strangers, he only has the urge to herd raccoons and the like, which would be humorous if the coons were not interested in eating my chickens and turkeys.

So, we decided to add another dog to the homestead. Meet Lucy, a Great Pyrenees from Triple Creek Dairy -- 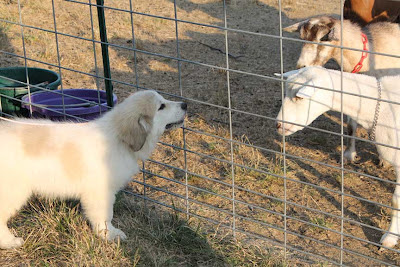 She was living in the goat barn when I picked her up, and when we brought her home, she looked rather scared and nervous until she saw the goats. She immediately perked up and ran straight to them. Because she is a DOG -<gasp>- the goats were not terribly excited to meet her, but they are slowly starting to come around. She understands how to deal with them, and if she sees them coming at her, she drops to the ground so they can't butt her. 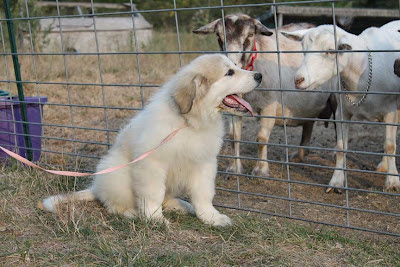 For the first week, we kept her in the barn in a kidding pen next to Carmen and her kids so that they could keep each other company through the hog panel partition, but Carmen couldn't beat her up. We let her out whenever we were outside so we could supervise her with the livestock, both for her protection and the other animals. 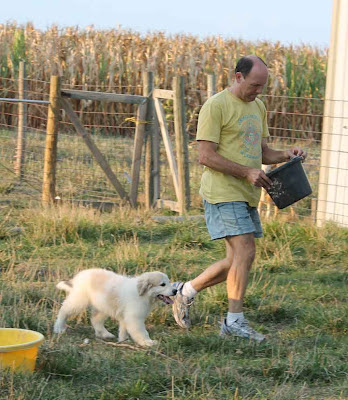 So far, she has shown absolutely zero interest in chasing any of them. I just love her personality and intuition about interacting with other animals. She has been spending the last few days in an interior pasture where a pig and a few turkeys live.

To help me remember that she was born in 2012, I decided to name her Lucy Burns because this is an election year, and Lucy Burns was one of the "baddest" suffragettes of them all. She worked for women's rights in both England and the U.S., and she was arrested more than any suffragette. She also led hunger strikes in the jails, and when they tried to force-feed her with a tube in her nose, it took five guards to hold her down. She was fearless, which is how I hope my little Lucy Burns will be when it comes to predators!
Posted by Deborah Niemann at 6:00 PM 5 comments: