As I am typing away at my computer working on The Ecofrugal Handbook, which will be published next fall, my goats are starting to show off their pregnant bellies, and I'm getting excited about the babies that will be arriving starting in January. Due to all my traveling this fall with the Homegrown and Handmade book tour, I wasn't here enough to catch everyone in heat in a timely manner, so kids will be making their debuts between January and April.

A couple days ago, we put James the American Guinea Hog back in the walnut grove with Julia and their babies, which means we can expect our next litter of piglets at the end of March. As I suspected, Julia weaned her babies somewhere around three or four months. Most people separate the piglets from mama around two months because they say the sow starts to lose too much weight, but the babies were two months old right when the acorns and hickories started to fall, so Julia actually started gaining weight about that time!

I'm sad that I'm down to one pair each of the silver and gold Sebrights, the bantam chickens that I added to the homestead this past spring. I don't know whether it was coyotes or coons, but whatever it was, the bantams are almost gone. I am thinking about trying to catch them so I can lock them in the barn in hopes of being able to raise some chicks in the spring. They may be small in stature, but they are big in taste. We butchered the extra roosters in the summer when they were around four months old. Each one dressed out right around one pound, so we split them in half and grilled them. Sebright now ties stew hens as my favorite meat from the farm. I didn't realize a grilled chicken could taste that amazing! 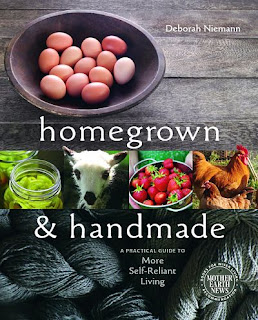 If you want to chat about making Christmas gifts or turkey left-overs or anything homegrown or handmade, you can head over to my publisher's book club, and if you join the conversation, you'll be automatically entered to win a copy of my book. The drawing will be on Dec. 13.

If you have been thinking that you would like to give a copy of H&H to a friend or loved one, you can click over to the Homegrown and Handmade blog, leave a comment before Friday midnight, and be entered to win.
Posted by Deborah Niemann at 3:27 PM 4 comments:

From the first year that we moved to Antiquity Oaks in 2002, we began to live in rhythm with nature, benefiting from our own labors, and feeling the consequences of labor lost. Of course, we weren't able to grow a lot of our own food the first few years, but as each year passed, we have learned to grow more and more. Today the main things we buy at the store are staples like flour, vinegar, sugar, salt, coffee, and cocoa. Sometimes I'll pick up something special like avocados or bananas that we don't grow, but the fact is that we grow so much of our own food now that we really don't have to buy much. It seems frivolous to buy anything when we have plenty of food at home to feed ourselves delicious and healthy meals.

We eat seasonally, which means tons of fresh fruits and vegetables through the growing season, including greens in our winter garden. I actually enjoy it because we eat so much when something is in season that we are pretty happy when the season is over. Then we start to crave it over the months when it is not available, and we are once again ecstatic when it is in season again.

Unfortunately there are some years when we wind up without a favorite food because of a crop failure or because of our own failure to actually plant the crop. That was the case with peas and okra this year. We never managed to find the time to get either one planted. You can be assured they'll be on the top of the planting list next year because I really miss my fried okra and my raw peas.

When we first moved out here, we were vegetarians, but even after we started eating meat, it was a pretty rare event because we only butchered extra roosters or rams or old stew hens. As we've added more meat animals to the farm though, and as our flocks and herds have increased, we are finding ourselves with more meat, and like the vegetables and fruits, the variety changes from year to year. Last year we had lots of pork and chicken. This year we have lots of turkey, lamb, and goat.

I can see where some people in our modern world would not like this because Big Biz has done such a good job of convincing us that not only can we have what we want, when we want it, but we should have everything we want, when we want it. Over the years I've begun to see the flaw in that logic, and not simply because so many people wind up in debt based upon that attitude.

When something is always available, we lose the concept of gratitude. When was the last time you got really excited at the grocery store? On the contrary, most of us find it a boring chore. You always know what's going to be there. You expect it. You depend upon it. You take it for granted. On the other hand, I get excited and am immensely grateful every February when our chickens start to lay eggs again because we've usually been without them for a couple of months. In fact, I get excited and grateful about every food when it comes into season. As they say, absence makes the heart grow fonder.

You also learn to live with the rewards and consequences of your actions or inaction.  As another wise person once said, you harvest what you sow. The funny thing about these adages is that today we've lost touch with their origins. If you fail to plant something (or weed and water), you won't be harvesting it.

Variety is the spice of life, as someone else once said, yet most of us can easily fall into a routine, doing and eating the same things day after day. Being presented with a variety of foodstuff makes me use my noggin and get creative. This year, I am learning to cook with goat meat. I used to think that I'd never do that, but that was before our does blessed us with 29 bucklings! We usually castrate most of the boys and sell them as pets, but there simply are not that many people who want pet goats.

When it comes to eating meat, I'm pretty sure that nature is giving us what we need in the right proportions. I get a little worried about people who think they should be eating bacon on a daily basis or liver ever week. If you are eating whole animals, you can't do either of those things because there isn't that much bacon or liver in an animal. When we butcher a whole pig, the bacon is only a small part of it, so if we spread out our bacon consumption, we're eating a pound of bacon for about every ten pounds of other pork. I suspect that if we decided to only consume our own lard and butter, rather than buying sunflower oil, we'd probably all lose another five pounds because our consumption of fried food would go down.

It's amazing how much we've learned since moving out here. I didn't know any of this a decade ago. I only knew that I wanted to eat more organic food, and I assumed that exercise would be a natural benefit of growing our own food. I had never even heard of the concept of eating seasonally. Today, however, I can see a lot of wisdom in this natural lifestyle.
Posted by Deborah Niemann at 12:13 PM 6 comments: