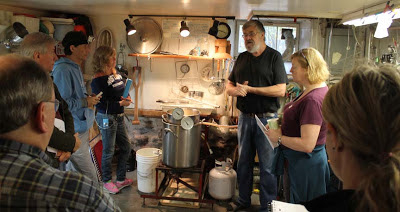 Last month Mike and I headed out to Massachusetts to attend a cheesemaking class taught by Jim Wallace, the technical advisor for New England Cheesemaking. Jim has traveled all over the world attending workshops and visiting with traditional cheesemakers. And people come from all over the world to attend Jim's classes. The gentleman in the light blue sweatshirt pictured above is a chef from Colombia. No, not Columbia, Missouri or Columbia, South Carolina. He's from the country of Colombia in South America! Mike and I flying out from Illinois was not a big deal, as there were several people there who had flown in from other states, as well as a few lucky souls who lived close enough to drive over to Jim's house for the class!

Obviously there is no way I can share with you everything that we learned in those two days, but I will tell you that half an hour into the first day, I knew it was worth the $375 that we each paid to attend. I've been making cheese for about ten years, and Mike has been making cheese for six. We've read books and followed recipes and tried to figure out why sometimes one thing worked and other times it didn't. We had so many questions about the science behind the curds and whey, and from one minute to the next in Jim's classes, there was one light bulb after another that kept going off in my head as I started to connect the jumble of dots that had been building in my head for ten years! My only regret is that I did not attend this class at least five years ago.

Mike took pages of notes. I took more than a hundred photographs. And by the end of the second day, my brain was so overfilled with information that it was as leaky as the Camembert that was draining! Here are a few highlights --

Most recipes tell you to cut the curds to a certain size -- like 1/4 inch or 1/8 inch -- and cutting curds diagonally is one of those chores that would just drive perfectionists crazy! But for both the cheddar and the toscano, Jim cut the curds into one-inch pieces, but instead of doing those crazy diagonal cuts, he then went to work with this gizmo that he fashioned from a whisk to look like the curd cutters that traditional cheesemakers use in Europe. 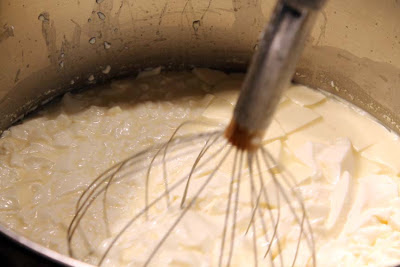 I tried using one of our whisks at home to cut the curds for a batch of feta, but some of the curds got too small, too fast, so I think I need a whisk with less metal thingies. And I should probably change the shape of the metal thingies the way Jim did with this one.

From the traditional cheddar class 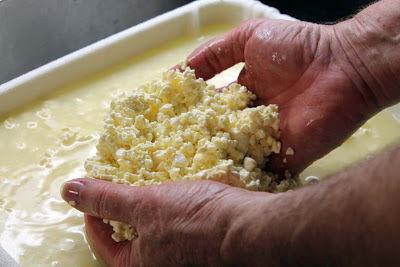 Jim uses Jersey milk from a local farmer, which is why the curds look yellow. Don't they look divine!

Cheddaring is kind of like French milled soap. You let the curds set up, then you rip them apart and start over again putting the curds in the mold. 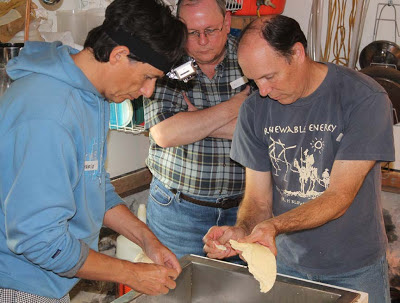 After cheddaring, class members helped to rip up the curds to prepare them for putting into the cheese press. That's Mike on the right. Chef Mario on the left has a little video recorder strapped to his head to capture every moment of the class for watching again later! 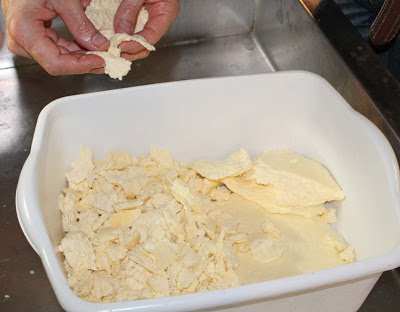 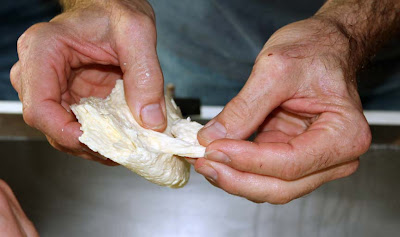 I have never seen a book that describe cheddaring very well, nor have I seen any that actually have pictures, so this was very helpful!

This is what the cheddar looked like the morning of the second class! 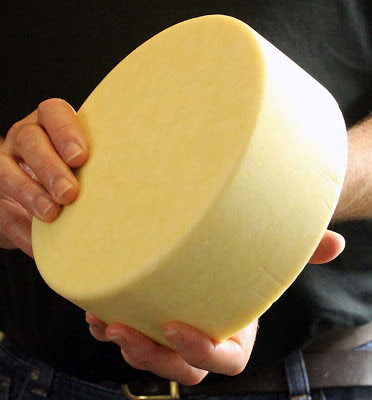 Since getting home, Mike has made two batches of traditional cheddar using tips he learned from Jim's classes. Previously, he had made farmhouse cheddar, which ironically omits the cheddaring step. 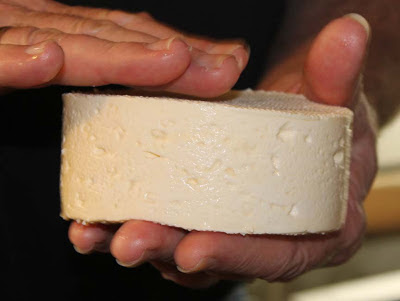 Over the weekend, we also made Camembert, a mold-ripened cheese, and Vacha Toscano, a tomme. Pictured here is one of the Camemberts after a few hours of draining. Mold-ripened cheeses had really been a challenge for me. In the past they turned out okay sometimes but not so great at other times. I learned in Jim's class that your success or failure with so many cheeses really lies in the aging -- or affinage -- which I had always assumed was my problem, but I had no idea what to do about it. I got some great ideas from Jim's class though, and I now have some Camembert aging beautifully.

Of the 17 different cheeses we have made in the past, we never made a tomme, but I am really looking forward to making one very soon. Jim's was delicious! Lucky for us, we still have a few goats in milk. Mike and I were saying that we should have taken this class in the spring when we are drowning in milk. We could have come home and started making cheese like crazy!

And this is Jim's cheese cave where he ages his creations. It is in a corner of his basement that stays naturally cool year round. He keeps mold-ripened cheeses in plastic containers to keep the humidity at the higher level that they need for proper affinage. 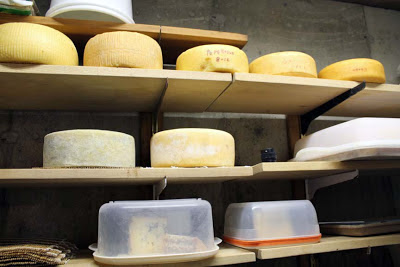 In addition to being blown away by Jim's class, I also fell in love with Shelburne Falls, MA. It is the most lovely little New England village. In fact, I'm writing a whole separate post about it!

And if you're a cheesemaker anywhere in the world, I highly recommend Jim's classes. He already has them scheduled for next spring. Click here to learn more.
Posted by Deborah Niemann at 6:00 AM 5 comments: Links to this post

Love is in the air

It's fall and that means one thing on the farm ... breeding season for the mammals. All of the goats are bred that I want to breed for January and February kiddings. The cows keep coming into heat, and we're working on finding them a boyfriend. Provided his DNA testing comes back negative for a nasty genetic disease, he'll be here soon. And now for the pigs --

I sold my boar last winter. I figured it was a no-lose idea. If I decided to stop breeding pigs, I'd have one less to sell, and if I decided to keep breeding pigs, I should buy a new boar anyway to breed to the former boar's daughters. Then as the months went on, I kept telling myself that I should sell all the pigs. Well, you know how my farm reduction plan has been going! So, I decided to borrow a boar from a friend. 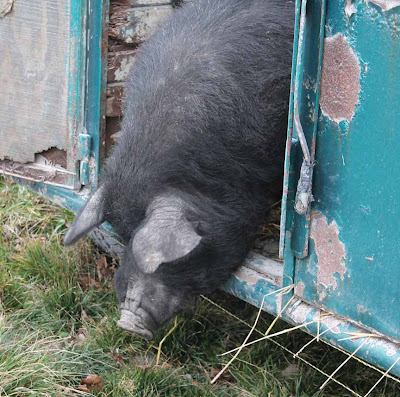 He was slightly shy about hopping out of the trailer. I suppose he thought he should play it cool around the new ladies. 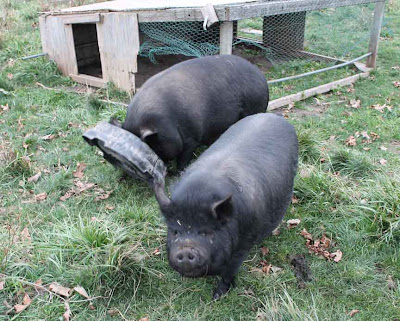 But in no time he was ambling around the pasture and checking things out, including the electric fence, which he had no experience with. He quickly learned to stay away from it. He also became a very quick fan of whey, which is a by-product of our cheesemaking. 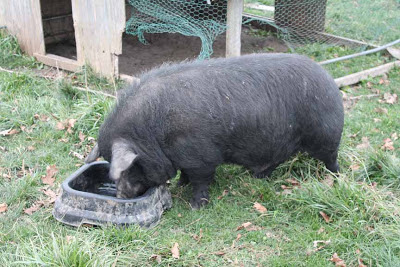 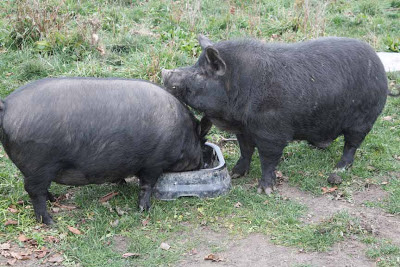 The girls are not terribly fond of him, but I'm sure that will change when the hormones kick in at some point. York will be here for about a month or until we've seen him breed both girls. Pigs are pregnant for slightly less than four months, so hopefully we'll be seeing piglets at the end of March!
Posted by Deborah Niemann at 4:29 PM 2 comments: Links to this post 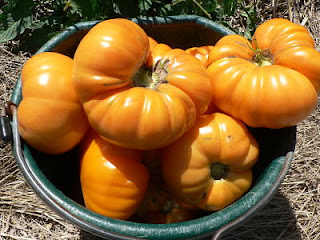 You may remember that a few months ago, I said I was going to liquidate the Shetland sheep flock, and a couple months later, I admitted I had sold exactly one ewe lamb. I have since gone through a variety of decisions to sell different species ... and changed my mind more than once. The simple fact is that I don't want to get rid of any of them. But I can't deny that there are not enough hours in the day for us to continue doing everything that we did when our daughters were still living at home. So, if I don't cut back on something, that means I need help! But who to hire?

A few years ago, I read an article by Joel Salatin in which he talked about hiring help for your farm. He suggested that the first employee you hire be someone who does the job that is your least favorite. Because he disliked leaving his farm to deliver his food, his first employee was a delivery driver. If I think about my least favorite job on the farm, I'd have to say it's gardening. It is really hard for me to say that because I want to do it all! But I'm an animal person. I love the livestock. I don't exactly love gardening, but I love the fresh produce, which is why I garden. So, logically I should hire someone for the garden.

Why did it take me so long to figure this out? Because we don't really make money on the garden, so hiring someone to work in there didn't make much sense. But if I think back to my original goals, it was supposed to be a market garden. And with 32 acres, we have plenty of room for a very productive market garden. We just need someone who has the knowledge and desire to do the growing. We can provide the land, the seeds, and the equipment. They could also sell the produce at a farmer's market, which would provide a source of income that we could share.

I don't have all the details worked out yet, and I need to do a bit of research to figure out how to make this work. But it seems to be a much better idea -- and something that I really want to do -- rather than selling off the animals.
Posted by Deborah Niemann at 8:07 PM 4 comments: Links to this post