No November madness this year 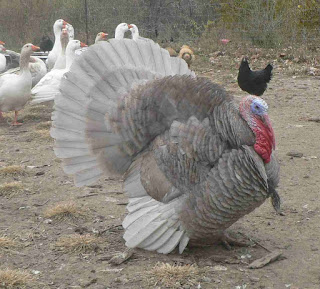 If you've been following this blog for a few years, you probably remember how crazy things get when the turkeys are processed for Thanksgiving. We have to get up at 3 a.m. to drive the turkeys down to Arthur, which is almost a three-hour drive. Most years we did it a few days before Thanksgiving so customers could have fresh turkeys because some people have the incorrect perception that frozen turkey is inferior. That meant that as soon as we got home with the turkeys we had to assign them to the buyer that wanted a turkey close to that size, then email everyone with the size of their turkey, balance due, and delivery time. The next day, Mike would head out bright and early to deliver turkeys. This year things were different.

It all started in the spring when our breeding turkeys were wiped out within a few days by a predator. We never saw any feathers or feet or anything, so although we initially thought it was a raccoon because the turkeys usually roost in the trees, we think it's more likely that it was a coyote that grabbed them during the day and carried them off. Only one hen had set so far, and as luck would have it, she had decided to hatch a bunch of duck eggs. Who knew I needed to check up on the eggs to be sure she was actually sitting on turkey eggs?

So, it was the end of May, and I was frantically trying to find turkey poults to purchase. All of the hatcheries were sold out of heritage poults, but they did have "hatchery choice" selections available, which are generally whatever is left of a variety of breeds. I assumed that we'd get mostly heritage poults. Bad assumption! Of the 20 poults they shipped us, only three were heritage, and one died within a few days. The rest were broad breasted bronze and white turkeys, which are the modern mutant breeds.

We had raised broad breasted bronze turkeys in years past because some people wanted free range turkeys that were more than 20 pounds, which just is not going to happen with a heritage turkey. I had chosen the bronze instead of white because they are not supposed to get as big as the white turkeys. However, if you raise them as long as the heritage turkeys before butchering, you will still wind up with turkeys that weigh 30-40 pounds, which is completely nuts! No one wants to buy them, of course. We donated one to our church one year for Thanksgiving dinner, and it fed about 60 people. 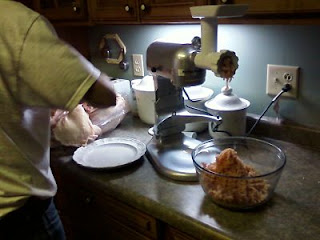 Because I didn't want any 50-pound turkeys, I knew these big boys would need to be processed sooner, much sooner than late November. So, Mike took them down last Friday. Even at four and a half months, we wound up with several 26 pounders and a 31 pound turkey. If no one buys them, we'll grind up the meat. In fact, we already ground up one of the 26 pound turkeys. We wound up with eight pounds of breast meat and four and half pounds of leg and thigh meat. Yesterday I made hamburger patties with some of the dark meat and served it with gravy and baked potatoes for lunch. It was really outstanding.

I really prefer having the turkeys processed in October also. It is far less stressful. People have the option of driving out to the farm on a weekend to see the animals, visit with us, and pick up their bird. Of course, we can still deliver them if people prefer, but it doesn't have to be the very next day in a marathon drive around northern Illinois.

As we are trying to figure out how to simplify our lives, this event has me thinking about whether or not we want to start another flock of heritage turkeys. When we started ten years ago, heritage turkeys were critically endangered. There were only a few thousand in the entire United States, and I was really excited about helping to grow their numbers and introduce them to consumers. Today there are a few thousand bourbon reds, which is only one breed. Because they can fly, they have always been a challenge to raise free range. One year, more than twenty of them simply disappeared one day. There is a part of me that is tempted to just order poults every spring, raise them, and butcher them all in the fall. Well, I have a few months to think about it.
Posted by Deborah Niemann at 10:44 AM 5 comments: