Looks like the FDA is really going to let cloned meat into the food supply without any labeling requirements, as well as milk from cloned animals. This sounds crazy, but it's true.According to one story, there are already 570 cloned animals in the United States. I'm glad I haven't eaten any commercially produced meat in the last 19 years. Who knows what is already in meat that we don't know about -- in addition to all the antibiotics and growth hormones that we do know about. It amazes me that we're supposed to trust the government to monitor the safety of our food when they claim that things like BHA, BHT, pesticide residues, growth hormones, and antibiotics are ALL safe! Yet, they fight tooth and nail to keep little farmers from selling raw milk or farmstead cheese or animals butchered on the farm. So, if you live in the city and eat only FDA-approved foods, it looks like you'll be having genetically modified tomatoes in your salad, cloned steak laced with growth hormones and antibiotics, along with your pesticide-laden potatoes. Yum! And it's all safe and nutritious!
Posted by Deborah Niemann at 10:45 AM 2 comments:

Email ThisBlogThis!Share to TwitterShare to FacebookShare to Pinterest
Labels: food

Adventures with sheep and goats 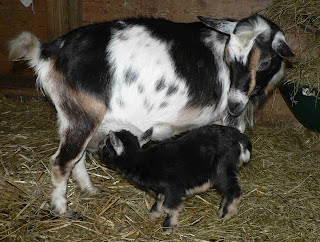 On January 8, Sherri gave birth to quadruplet doelings! She has had triplets every year (four years running), so the quads were unexpected. They were also quite large for quads. The smallest was 2 pounds, 14 ounces, and she was not standing or nursing after an hour, so we brought her inside to bottle feed. Her sisters are growing so fast, but she is staying small and runty. That's a picture of a four-day-old kid nursing.

Yesterday, our sheep disappeared. Shortly before sundown, someone called to say the sheep were down the road. When we got there, they had just run into the timber. The dog, who is still green at only 10 months of age, ran straight at them, which just drove them farther into the woods. Then we couldn't find his "off" switch. But as it got darker, the sheep just would not move. Mike caught one and carried her out of the woods, which was about half a mile. We decided to leave everyone else and wait until dawn.

This morning, four of us went out there, armed with corn chips, crackers, and loose sheep minerals. As soon as they saw us, they came running toward us, then they suddenly took a sharp left turn. Thankfully, that was towards home. We couldn't keep up with them though. They ran all the way home! Very strange!

As I was tromping through a frozen, crunchy corn field and then down a deserted country road as the sun started gleaming over the horizon, it reminded me of the Army commercial they had on television about a decade ago. These men get out of bed in the dark, then start jumping out of helicopters, shooting, blowing things up, and then they're sitting around a campfire drinking coffee as the sun comes up. The voice-over says that in the Army, you'll do more before dawn than most people do all day. I guess that homesteaders don't count.
Posted by Deborah Niemann at 9:46 PM 1 comment:

Providing our own heat

In December, we were running out of propane, so Mike called the gas company and left a message on Friday. No response. He called again on Monday, then Wednesday. Finally he spoke to someone who told him gas would be delivered in a day or two. That adds up to Friday, but by 5:00 Friday, we had not received a delivery. He called again and was routed to the emergency number, where he was told that if we wanted a weekend delivery, we'd have to pay an additional $212. I was furious. No, we would not be ripped off by the gas company, even if it meant we might lose heat over the weekend. We have six-inch exterior walls with excellent insulation, and the in-floor heating actually emits warmth for quite a period of time even after the gas turns off.

We came up with a plan. We need gas to heat water, which also heats our floor -- and our house. We also have a gas stove in the house, but in the barn, we have an electric stove. We also have an electric griddle, a crock pot, and a bread maker. We decided to do most of our cooking with the electric appliances -- pancakes on the griddle for breakfast, soup in the crock pot for lunch with bread from the breadmaker, and then for dinner we'd use the electric stove in the barn. We turned down the thermostats to 65 degrees and decided not to shower all weekend or use hot water in any other way.

By the end of the weekend, I realized that 65 degrees really is not that uncomfortable when one is wearing three layers (undershirt, turtle neck, and sweater), and in fact, when I was cleaning house, I got hot and had to take off the sweater. By the time the gas had been delivered on Monday, I had decided only to raise the temperature in the bedrooms to 68 degrees at night and 67 during the day. I saw no reason to raise the first floor temperature any higher than 65.

Then, I saw the bill. They had charged us $3.44 a gallon for the propane. My first reaction was to panic and think about how we would never be able to continue to use propane as a source of fuel if the price was that high. I didn't know what we had paid last time the tank was filled, but I knew that it was under $1 a gallon five years ago. I checked prices on the Internet, and the national average was a dollar less than we had been billed. When we called the propane company again, we discovered that we had been overcharged -- we should have been billed $2.11 per gallon. We were told that our bill would be adjusted, but this did not make us feel much better about the situation. If they wanted to charge us $3.44 per gallon, they could. And at some point, they will. Even with our super-insulated home and 95% efficient gas water heater, it will be too expensive to use propane.

We have 32 acres of mostly wooded property, and every year at least a couple of trees are blown down in a storm or fall down because of beavers chewing up their trunks. We have at least one living tree with solid wood go down every year. Last year, a huge tree fell down because it was growing on the bank of the creek, and erosion caused too much of the roots to become exposed, and the tree just fell down. We have a truly unlimited supply of free heating fuel. Using wood from your own property is also carbon neutral, so it's better for the environment. Although burning wood does emit greenhouse gases, the growing trees have been reducing them. Bringing the wood to our house uses zero fossil fuels, which emits zero greenhouse gases. And if we use wood to heat, we won't be using propane, which has to be trucked in to our house after it has been refined somewhere and brought in from some field possibly thousands of miles away.

As I type, Mike is installing a wood stove. The best thing about a wood stove is that we will always have wood. Mother Nature won't suddenly raise the price to something we can't afford. There are no weekend delivery charges. Chopping wood is great exercise. With our cast iron cookware, we'll even be able to use it for cooking in the winter.
Posted by Deborah Niemann at 7:07 PM 4 comments: