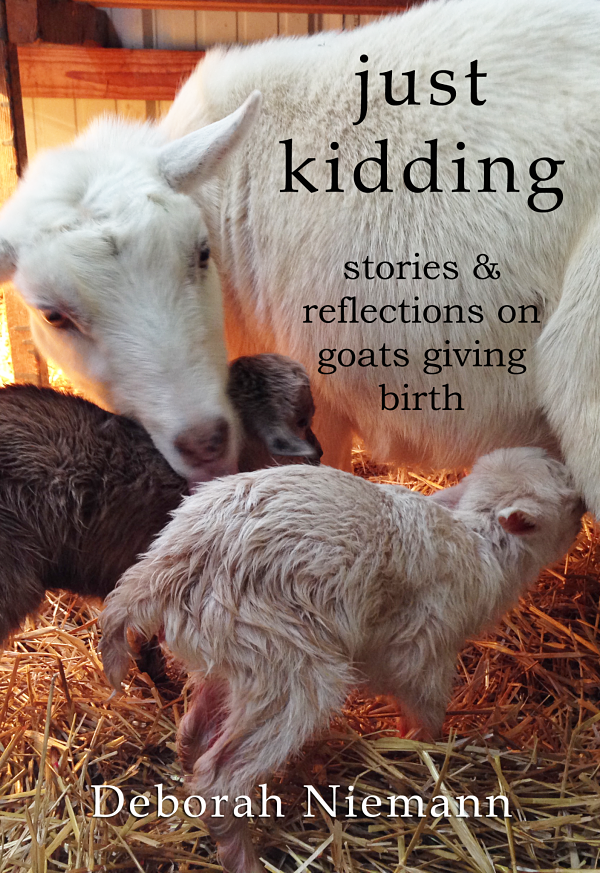 For those of you who like reading the goat birthing stories on here, I've created a collection of 17 kidding stories. In addition to the original birth stories, I also added commentary to each one. What went well? What would I have done differently? What would not have made a difference?

And if you ever wondered what happened when Coco gave birth two years ago, I finally tell the story in the book. If you've been reading my blog for that long, you might recall that she died of a ruptured uterus after giving birth to five kids. Actually we had to take her to the University vet hospital, and they pulled the last four kids there because they were quite tangled up. Although all five kids survived, Coco did not, and I was so upset, I was unable to write her birth story at the time. The book also includes the complete story of another goat that had birthing difficulties a few years ago.

I wrote the ebook because there are so many questions from new goat owners about what to expect when their goats give birth. The book includes several normal births, including those that are not textbook perfect but still not problematic. Those are the births that seem to confuse new people the most. And because everyone worries about the possibility of a caesarean section, I included stories of our two experiences.

The ebook is available in all formats, from a simple PDF to those that will work with a variety of ereaders from Kindle to Kobo. If you don't have an ereader, you can download a PDF or get the free Kindle reading app for your computer or iPad. The ebook is only $4.99 and is about 40 pages long. Click here to learn more and to order your copy.
Posted by Deborah Niemann at 7:00 AM 1 comment:

Since my last kidding post, six more goats gave birth and I hurt my back twice. I can't possibly provide all of the details on everything, so here is a short summary ...

This year's goat births have been going extremely well! Of the ten goats that have given birth, no one has had any problems that required assistance, even though they had some challenging presentations, such as an ear first, a posterior, and a couple of breech kids. We had two sets of quintuplets, three sets of quads, three sets of triplets, and two sets of twins. That's an average of 3.5 kids per doe, which is unbelievably excellent! Even better, we've had 22 does and 13 bucks. Since these are dairy goats, the does are the most coveted because obviously boys don't produce milk. Of course, I should not get too excited because we still have eight does left to kid, and they could have lots of bucks and flip that ratio on its head.

Two weeks ago I stepped in a hole, which threw my back out, and I spent two days in the recliner on the first floor of our house because I couldn't walk upstairs. After a week I was doing pretty well, other than feeling like someone was following me around and randomly stabbing me in my lower back. Then on Tuesday I was doing chores, and the mud was just too much for my back. I was able to make it back to the house under my own steam, but then I spent the next 48 hours incapacitated, either in the recliner or in the guest bed on the first floor. Who knew that walking in mud could throw your back out? The chiropractor said I have a bulging disc, so tying my shoes could throw my back out. I am really hoping it won't get that bad.

In the meantime, Mike and I are talking about adding a first floor master bedroom because between my knees and my back, going upstairs is getting harder and harder. After 10 years, the house is still not entirely finished, so adding on sounds a little funny, but I need a first floor bedroom more than trim on the windows, so an addition sounds pretty important right now.

If you missed Friday's post about our upcoming farm dinner, click here for more details and to make reservations.

Posted by Deborah Niemann at 8:00 AM 2 comments:

I've been wanting to have on-farm dinners for awhile, and we are finally doing it. They are scheduled for Sundays, June 14 and August 30, starting at 4:00 with hors d'oeuvres and a farm tour. Dinner will begin at 5:00.

Monika Sudakov of the Chestnut Street Inn will be our chef for both events. We are still debating the main course for the August dinner, but the June dinner will feature heritage Plymouth Rock chicken for the main course and créme brulee for dessert, made with our fresh eggs. The Plymouth Rock chicken is on the Slow Food Ark of Taste. Although it was quite popular a century ago, you can't buy it today in supermarkets, and in blind taste tests, most people agree that the flavor is superior to modern hybrid chickens.

In addition to dinner, guests will get a tour of the farm so they can see the garden where their dinner salad and vegetables were grown, and they'll get to see the new baby goats that are due to be born in late May.

Dress is casual, as we will be dining outside. Because GPS has trouble finding us, don't hesitate to contact us for directions, if this will be your first visit to the farm.

Click here or page down for tickets to the June 14 dinner. There are only 36 seats available, and rumor has it that farm dinners sell out rather quickly, so it's a good idea to buy your tickets soon.

Event Registration Online for Antiquity Oaks Farm Dinner -- June powered by Eventbrite
Posted by Deborah Niemann at 8:00 AM No comments:

The day before Victoria kidded, I realized that I had not appreciated my senior does enough. You see, when a goat has given birth before, they are usually very stoic until the last minute or two before the kid is actually born. Victoria was a first freshener and completely freaked out by every little contraction. Sunday night after Cicada gave birth, Victoria was screaming her head off, sounding quite unhappy. I went running out to the barn a few times only to find her standing there screaming as if to simply express her displeasure. She was standing like a normal goat and just screaming. She wasn't pushing or laying down or pawing the ground or anything that a goat normally does when in labor. Even though she is not a friendly goat, she was very unhappy and would scream more whenever I left her. So I wound up staying with her for three hours! And then she was quiet. I came inside, and we went to bed and went to sleep.

Monday morning shortly after Mike left for work, she started screaming again. I decided to take a book out to the barn office and read because it was obvious that she was not going to stop screaming anytime soon. Even though it was a really dreadful scream, her body language just looked like she was mad about something, so I wasn't taking it very seriously.

An hour and a half after I went out there, she finally got serious, and it was obvious she was actually pushing. She's lay down, throw her head back, curl her tail over her back, and stretch her legs out in front of her as she screamed. She also quit eating. And then things got interesting. 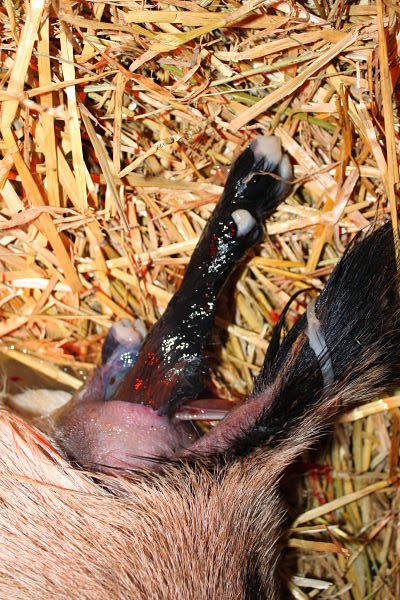 A hoof was sticking out, but it was upside down. That meant that the kid was either posterior or breech. Breech would not have been such a bad thing, especially if it was feet first. It would actually be pretty easy for Victoria. However, after ten minutes of pushing the foot was sticking out about three inches, and there was no sign of progress. I ran my finger along the leg and bumped into a nose and mouth. That meant it was a posterior kid. The books tell you that in those situations, you should reach in and flip the kid over. Since I was home alone, the odds of Victoria standing there while I did that were somewhere between zero and never. The idea of doing that also worried me because of the risk of tearing the uterus. I went looking for some disposable gloves and some iodine, but I wasn't entirely sure what I'd do when I actually had them. In the meantime, Victoria kept pushing. About fifteen minutes later, the kid was born. The head actually came out sideways, which I don't recall ever seeing before, and the body came out with the kid's belly facing Victoria's tail, which is basically upside-down. The little doeling was in great shape, and as Victoria and I started to clean her up, I noticed another upside down hoof sticking out of Victoria's back end.

"Seriously?" I asked Victoria. "Another one?" I ran my finger along the leg, and when I came to a joint, I bent it. Since it bent in the direction of the top of hoof, that meant it was a hind leg, and I knew the kid was breech, which should be much easier than the posterior kid that she just delivered. And a couple minutes later, the breech doeling was born.

Victoria has been an excellent mom from the very beginning. I think she heard that I'm planning to seriously reduce our goat herd this year, and she wants to be sure that she makes the cut and gets to stay here. After all it was pretty impressive for her to give birth to doelings that weighed 3 pounds, 4 ounces and 3 pounds, 9 ounces, especially since one of them was posterior, which is never easy, even with smaller kids.

Posted by Deborah Niemann at 6:33 PM No comments: