More than two years ago I was diagnosed with Hashimoto's disease, and since then I've done what most doctors would call impossible -- I've put it into remission. When I've talked about it on Facebook or on this blog, a lot of people have told me I should write a book about it. However, a lot of other people have already written books, and in fact, I read those books to figure out how to heal myself. I started a health blog a few months ago so that I could share information about books and authors who've helped me along my journey, although I've not been very good about posting. 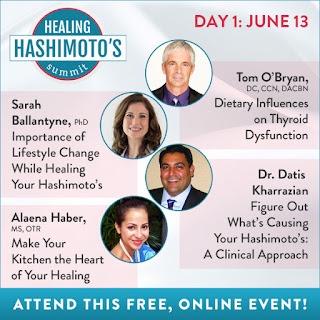 I was really excited to learn that there will be a Healing Hashimoto's online summit from June 13 to 20. Like most online summits, you can listen to the talks online FREE during the event. Each one will be available for 24 hours, and if you'd like to be able to listen to them again and again, you can purchase lifetime online access or a flash drive with the talks on them.

Some of my favorite authors will be presenting the following sessions ...

It's tough for me to tell people what I did to put my Hashimoto's into remission because there isn't a magic bullet, and triggers can vary from person to person. For me, it was a combination of things like discovering food sensitivities, changing my diet, starting to take a few specific supplements (such as selenium), eating more fermented foods, meditating daily, and going to bed earlier. But it's been totally worth it because I'm now healthier than ever -- and thinner too!

The summit provides a great opportunity for people to get enough information to get started on the path to healing. Click here to register now so you can attend online for FREE starting Monday.
Posted by Deborah Niemann at 5:46 PM 2 comments:

Rats and raccoons and chickens 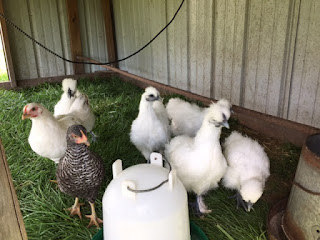 Last fall, raccoons got almost all of our laying hens. Earlier this spring, rats got into the stall that we use as a brooder, and before we realized what was happening, they had eaten all but three. Not to be dissuaded, we got more chicks. We put them in a large water trough with an old window screen over the top, and one day, we discovered a hole in the screen, and some of the chicks were missing.

Ultimately only three of the original chicks went out to the front yard into a chicken tractor. They were doing great until one morning when we walked out there to find feathers everywhere. The raccoon had been able to pull two of the chickens through the 2" by 4" welded wire, but the third one was laying in the chicken tractor decapitated. Chickens have terrible night vision, which is why a raccoon was able to grab them and kill them through the wire.

The second group of chicks went out a few weeks ago, and yesterday we realized that of the 13 Silkies (the white ones with blue beaks and faces) that went into the chicken tractor, only 9 were left. We set up two live traps for raccoons and baited them with cat food. Around 10:00 last night as I was brushing my teeth, we heard what sounded like a chorus of Alvin and the chipmunks on high speed. Mike grabbed a gun and ran outside but before he got there, the raccoon had escaped from the trap and was nowhere to be seen. Our English shepherd Porter went running around the pond in the dark, but he didn't find the raccoon either. We hoped that the coon had been so scared by being trapped that maybe he wouldn't come back. Then again, I silently thought that maybe he had simply learned to not go into a trap again.

This morning, my fear was realized as we found four more Silkies missing, as well as a white rock. We had put a board and a cinderblock in front of the hole that we found yesterday, and it had been moved. Raccoons are stronger and smarter than we thought. To add insult to injury, a chicken was in the trap. Apparently she was trying to escape and ran into the trap that was just outside the chicken tractor. Yes, that means the raccoon totally ignored the cat food in the trap and instead went for the live chickens.

Five chickens of this size is a lot of chicken meat for a raccoon, so we are wondering if there is a whole family that's feeding off of our young chickens. So far we have only ever seen one raccoon. Mike saw one walking out of the barn one night as he was finishing up chores, and our new intern saw one walk out of the chicken house at dusk one night. Oddly, he didn't have a chicken. Perhaps he was just in the mood for some chicken grain or eggs at the moment and figured he'd come back for a chicken entree later? But the chicken house is locked up tight every night, so we haven't lost any from there.

We have another batch of 33 chicks in the barn, and so far we've managed to keep them safe. They are in a water trough that is standing on top of another upside-down water trough, and it's surrounded by rat traps, which catch rats regularly. When we first realized we had a problem with rats in April, we caught 13 rats in the first two days! We do have a cat out there who is also a great mouser, and he has caught several rats, as well. I don't understand why we never had a problem with rats in all these years until now. My only thought is that the huge fox snake that lived in the barn for years probably died. He was at least six feet long, and the ones we've seen so far this year have only been about three feet long, which is perhaps not big enough to eat rats yet. Or maybe Patches the 12-year-old cat that is now retired in the house was a better mouser than we realized.

As for the raccoons, I'm not sure what we'll do, but we have to have a plan for tonight, or we probably won't have any chicks left by tomorrow morning. We will definitely put Lucy the Great Pyrenees in the front yard, but I feel like we also need to do something else to keep the chicks safe. Perhaps we can put a rabbit cage inside the chicken tractor just for tonight, so that there will be two barriers between the chicks and the coons, and maybe as the coons are trying to figure out how to get the chicks, Lucy will take care of them.
Posted by Deborah Niemann at 6:36 PM 3 comments: