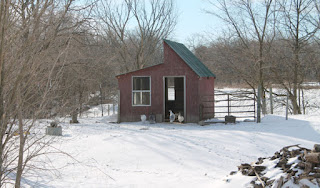 When we first moved out here in 2002, I truly thought that I only needed to look to memories of my grandparent's farm to know what to do. And my grandparents had a chicken house. When I discovered that chicken houses in Illinois had dual-pitched roofs and were faced towards the south to keep naturally warmer in winter, I decided to design just such a chicken house for our homestead.

In no time, the beautiful grass carpet in front of the chicken house was gone. It was replaced by a mud slick most of the year and an ice slick the rest of the time. What would you expect with 50 or 60 chickens running in and out all day long? Of course, grass can't grow there.

The other thing I didn't like was that the chicken house was so close to the barn that many of the chickens decided that they would just as soon find a cozy spot in the barn to lay their eggs. So, we were going on egg hunts daily.

But every summer there would be at least a couple of hens that would do such a good job of hiding their eggs that we didn't find them ... until they got rotten and exploded at some point during the summer heat.

What's a homesteader to do? Build a portable hen house, of course! 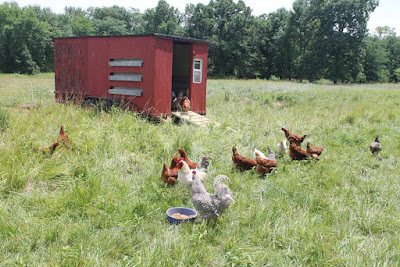 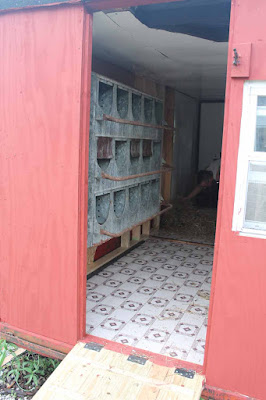 After a bit of searching on Craigslist, we found an old construction site trailer that we purchased. It was basically a wooden box built on a flatbed trailer. We had to replace one and a half walls that were rotten, which was fine because we added roll-out nest boxes to the new wall.

The back wall, where the door was located, also needed to be replaced, and that's where we put a new drop down door, which doubles as a ramp.

We set up poultry netting around the mobile henhouse and opened the door. 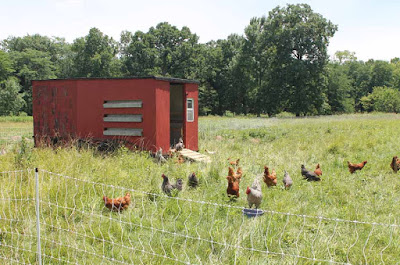 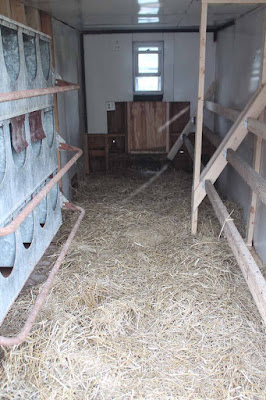 The idea is to move the henmobile regularly so that we don't wind up with areas where all of the grass is killed. The chickens follow the sheep in a rotational grazing pattern. The sheep eat down the grass, then the chickens come in and eat fly larvae and other insects while continuing to fertilize the pasture. 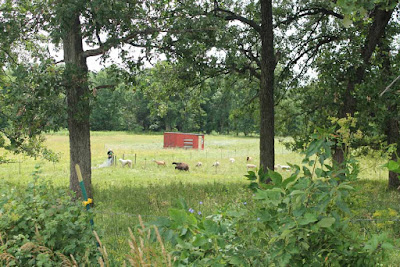 Email ThisBlogThis!Share to TwitterShare to FacebookShare to Pinterest
Labels: chickens 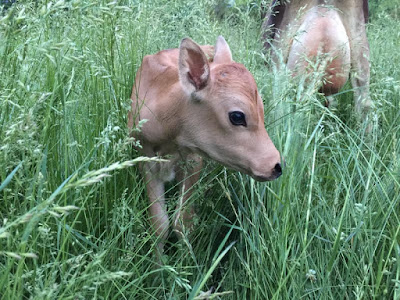 When we went to do evening chores on May 31, we were greeted by this lovely little fellow. Beauty, our Jersey milk cow, gave birth sometime in the afternoon.

I immediately started to worry about the little guy because he didn't seem to know much about nursing. Beauty's udder was really full, and his tummy was really sunken. When I squeezed each of her teats, milk easily squirted out of three of them, meaning that he had at least nursed enough to get the milk plug out. The fourth one, however, still had the plug in it.

Since the pasture is huge, and the grass was so tall, we were worried he might get separated from Beauty and not be able to nurse enough. Plus, there was rain in the forecast, and we were worried about him not following her to the shelter -- if she even decided to go into the shelter when it started to rain -- so we took them into the barn for a few days of bonding. We also kept trying to show him the teat and get him to nurse. Gardener Sarah and I quickly agreed this was a big advantage of goats -- they are much easier to handle when you want to get them nursing.

I kept reminding myself that most calves get this thing figured out easily on their own, but still I was worried. Thankfully we did see him nurse a few times before we went to bed that night. And the next morning, we noticed he had a full tummy!

He is doing great, and we castrated him a week ago. Since Beauty's last calf Beau got so obnoxious when the testosterone kicked in, we decided that we should castrate this one so that he won't be so scary when he gets bigger. Yes, his ultimate destiny is the freezer, so I named him Chuck Roast, and we're just calling him Chuck for short.

Since Beauty is making way more milk than Chuck and us humans need, we are hoping to get a bottle calf to also raise for meat. Plus Chuck will have a playmate.
Posted by Deborah Niemann at 12:17 PM No comments: