This blog post has been percolating in my head for months. It's a blog post I never wanted to write. It includes facts I don't want to be true. Many of you know I grew up as a "sickly" child, according to my mother and doctor. There was "nothing" that could be done to keep me healthy, again according to them. But in my 20s, I discovered that by adopting a diet rich in real foods, I no longer suffered from the all-too-common colds and flus and other ills that had plagued me for the first two decades of my life. I would go as long as five years without a cold and ten years without the flu.

For the past year and a half, I've become the sickly child again. At least that's how I feel as I've dealt with one health issue after another, some of which I've written about here. All along in the back of my head, I had a nagging feeling that I might have a problem with food sensitivities.  But my brain would quickly respond that's not possible! But then the other side of my brain would say, "remember back when you were a vegan, your problems with constipation went away, and every time you'd have a little piece of cheese or other dairy product, it'd come back." But the rest of my brain would just ignore that. It could NOT be true! I LOVE cheese! I write about cheesemaking. I talk about cheesemaking. I TEACH cheesemaking! 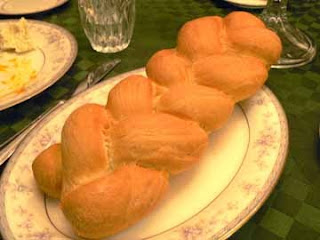 Last year when I got diagnosed with Hashimoto's, I read that the majority of people with thyroid disease have a sensitivity to wheat and gluten, and that some people have actually reversed the disease by removing gluten from their diet. I was sick and tired and desperate, so I quit eating wheat, which meant no more bread baking, which we had been doing for the past 26 years, almost daily for more than a decade. (See that pic on the right.) I LOVED bread! There are bread recipes in my books. I've taught bread baking from Washington State to Pennsylvania and Virginia, and I always felt bad when someone would ask me if I had any tips for gluten-free bread. I even said, "I don't know what I'd do if I couldn't eat bread!" It seemed a horrible fate. But after eliminating wheat from my diet, it became obvious that my body didn't like it. I'd occasionally wind up eating something with wheat in it when traveling, and the only thing that happened is that my digestive system would just shut down. Not pooping when you're traveling is not such a bad thing ... until you've gone five days!

Many aspects of my health have improved since eliminating wheat. I haven't had a cold or flu in more than a year now, I no longer have migraines, my asthma is gone, and my Hashimoto's is in remission. My antibodies were cut in half, and my hormones have remained at an ideal level. I no longer take any prescription meds. My vitamin D and vitamin B12 deficiencies have been completely corrected, and those levels are now optimal. But things weren't perfect. I still had nagging digestive issues, including constipation, motion sickness, and random nausea in the middle of the night. After seeing how my body reacted to wheat, I knew that I probably had other food sensitivities, which were wreaking havoc on my digestive system. But what?

The gold standard for figuring out food allergies is an elimination diet. I started talking about it last year and said that after the holidays I'd start. The holidays came and went, and it didn't happen. I gave a half-hearted shot at it in January, but I had one excuse after another why it wasn't a good time. Finally, in March after reading yet another book about auto-immune diseases and how food sensitivities play a major role, I started one day cold turkey. I eliminated corn, soy, dairy, eggs, peanuts, and tree nuts. After three weeks of not having any of those foods, I started to add them back into diet one by one with several days in between so that there would be no confusing which food was causing a reaction.

Of all the foods I eliminated, the only one that I've been able to add back into my diet with no problems has been peanuts. Everything else caused a reaction of some sort. Eggs was one of the worst as it caused chaos in my digestive tract, starting with nausea. I was also sleepy and dizzy and generally feeling like I'd come down with a stomach bug. It occurred to me that my motion sickness and random nausea had probably been caused by eggs all along. In fact, as I was flying into Denver last month in a rather bumpy flight, it suddenly occurred to me that I was feeling absolutely no motion sickness at all!

I could write pages and pages about this, but since March I've been keeping a food journal and writing down everything I eat and everything that happens to my body. I've tried to re-introduce most foods more than once because honestly, there isn't anything that I want to give up. Above all else, the number one thing I did NOT want to give up was dairy products. I've only tried cow milk once, and it was in the form of yogurt. It was our wonderful grassfed Jersey's milk made into yogurt, which is supposed to be easier to digest because of the probiotics, and yet it was not good. I had a smoothie made with the yogurt and didn't poop for three days. Not fun! 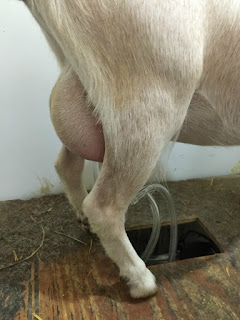 The goat milk did slow down my digestive system some, but not nearly as bad as the cow. This has made me very unhappy. It's not like I can just stop buying this stuff at the store! I have 14 goats out there making milk as I type. So far, this spring, all of the milk has been used to feed kids, but at some point, the kids won't need the milk any longer, and how am I going to feel about continuing to go out there and milk them every day? At the moment, my husband is actually doing almost all of the milking, but when he starts teaching again in the fall, the job will be mine again. I love my goats, but I originally got them because I loved their milk and cheese and yogurt. What will I do if those reasons no longer exist? I honestly don't know.

At this point, I've told myself that I should just continue for the next year before making any decisions. I've spent the last 13 years building a wonderful herd of milkers, and it would be tough to give that up. I am hopeful that as my body continues to heal, I will once again be able to consume their milk. Many people have been able to do that, but not everyone. I am not a patient person. I wish I knew what the future would hold for me, but I must learn patience.

That leads me to the next thing that causes health problems -- stress! Stress plays a major role in almost every disease. And we are all under stress. I constantly hear people say that they can't do anything about the stress in their lives. And I've said the same thing myself. But I've spent a good chunk of the past year reading books to help me regain my health, and it has finally sunk in ... we will all have stressful situations come into our lives every day, and we can't help that. We can, however, control how we respond to those situations. And it isn't just a matter of saying that you won't get upset when something negative happens. That just does not work.

I've learned that we have to make a conscious effort to regularly force our minds into a state of relaxation. Okay, "force" is not the right word, but it feels like that in the beginning. I've starting practicing yoga and meditation on a regular basis. I'd love to say daily, and that's the goal, but I'm not there yet. I have noticed that when I meditate daily, my response to stressful situations is much more calm -- and that's exciting! 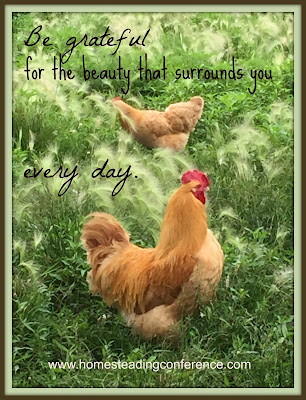 I've also learned to take time every day to be grateful for the beauty in my life. Even when things are not going well, there are things to be grateful for. When I had car trouble last month, I sat there and thought of all the things for which to be grateful -- a tow truck was coming, I had peanuts in my purse, and so on.

I knew I'd be entering a new chapter in my life when my children left home. I also knew menopause would create some changes. But I always thought they'd be outward things, such as a new career. I never anticipated the changes within my body and mind that would have to happen. Yes, I have had my pity party, as I did not want any of these changes to happen. I thought life was perfectly wonderful over the past decade. But we have to play the hand we're dealt, and I intend to figure out how to make this next chapter the best yet.
Posted by Deborah Niemann at 6:25 PM 9 comments:

Email ThisBlogThis!Share to TwitterShare to FacebookShare to Pinterest
Labels: about me, goats, health 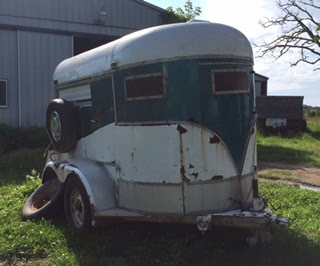 We bought this horse trailer in the first few months after we moved out here in 2002. It came as part of a package deal with Katherine's horse Buddy. The horse died at the ripe old age of 30 in 2008, but the trailer, which is 1970s vintage, kept rolling along .... until last week.

Mike used it to take chickens to the processor down in Arthur, which is about a two-and-a-half hour drive. When he came home, he was backing up the trailer to park it when one of the wheels fell off. Apparently the bearings self destructed. So, it will soon be going to the scrap yard.

That old trailer served us well over the last 13 years. It carried goats to goat shows, and chickens and turkeys to the processor, as well as lambs, pigs, and calves. We used it to pick up our Irish dexter cattle in Missouri and to bring home Beauty the Jersey and her calf Beau last year.

It is time for us to move on, and we'll be purchasing a bona fide livestock trailer to replace it.
Posted by Deborah Niemann at 1:12 PM 3 comments: