Breeding challenges? What's so challenging? They just do it, right? Well, yeah, but because we want to know who breeds whom, we have to set up the goats on dates. And because we want to know when the kids are due, we wait until the does are in heat and then put them together with the chosen one. That is much easier to do when (a) you have no physical limitations, or (b) you have children with no physical limitations who can help. I used to have both. I currently have neither!

This morning before leaving for work, Mike mentioned to me that Taylor was screaming her head off. Ah, that's who's making that racket out there. I looked out the window, and her wide-open mouth matched the sound of the screams as she stood at the gate to the barn pasture staring towards the buck pens. This should be easy, I thought, because she's a trained milk goat. She runs into the milking parlor twice a day, every day for milking. Well, obviously she was afraid that I had some terrible fate in mind for her because this turned out to be anything but easy!

I went to the pasture and opened the gate so she could come into the pasture where the buck pens are located. She eyed me suspiciously and then ran past me. To complicate matters, this pasture has been rooted up quite a bit by the yearling piglets, so there are lots of holes and little hills that make walking a challenge -- even for someone with a good pair of legs. Don't even think about running, I told myself. Patience is a virtue ... and reduces injuries. But every time I came without twenty feet of Taylor, she'd bolt! You'd have thought the doe had never been touched by human hands in her life.

I wanted to breed her to Monarch, but if I couldn't catch her, that was going to be a challenge. She visited the buck pen where AJ was hanging out with Victoria, a yearling who is being pen bred. She flagged (wagged her tail) at him, and he sniffed her and turned up his lip, meaning that he liked what he smelled. Then she trotted down to the buck pen at the other end of the pasture where Calvin and Austin were staying. She was bred to Calvin last year. I really hoped that she would not plant her feet down there and refuse to move because it was the farthest from where Monarch was staying. Finally she trotted back to AJ, and I decided that it might just be easier to go into AJ's pen and bring him out. After all, there were no other does in the barn pasture. So, I went in there, and AJ ran away from me!

"Seriously, dude? Do you want to have sex today or not? Because if you run away from me, it's not happening!" I took a few more steps towards him, and he ran away again. He is four and a half years old. This is his fifth breeding season. He really should know that when there is a girl in heat, and I come to get him, it means only one thing! "Well, never mind then," I said as I turned and left his pen. "Your loss." I really wanted to breed her to Monarch anyway, so I decided that catching Monarch and bringing him into the barn pasture might be the easiest route.

I went into the little barn where Monarch was staying with the three bottle bucks. Monarch is only six months old, which is why he is still with the baby bucks. I thought it would be easy to catch him because when I was trying to take pictures of him last week, he kept jumping on me. But of course this couldn't be easy either. He came running into the barn from the pasture when I called the boys, but as soon as I tried to catch him, he started running around the stall in a big circle. So, I got a pan of grain and a lead rope. Finally something went right! He went for the grain and didn't care that I was putting a lead around his neck.

As soon as I took him into the pasture, he and Taylor spotted each other. She came trotting over, and he ran to her. He sniffed her, she flagged, he blubbered, she stood, he mounted, she hunched her back indicating a successful mating, and that was that. Yes, it really does happen that fast. Had I blinked, I really would have missed it!

But a single mating isn't always enough, especially with a six-month-old buck whose sperm count may not be that high yet. At that point, Taylor decided to play hard to get, so she started trotting around the pasture, and Monarch tried to run after her, dragging me behind him. After about five minutes of this, she decided to stand again, so there was another successful mating. I can't do this all morning, I thought. I should be able to catch Taylor next time she stands for Monarch. So, I grabbed Taylor's collar and led them both into the barn so I could put them into a stall for the day.

Leading two goats across a pasture -- one by the collar and one with a lead -- is not as easy as it sounds. Monarch is not exactly trained to lead like a dog, so he was zigzagging all over the place and ran around me, wrapping the lead around my legs. Because I had one hand on Taylor's collar, I couldn't move the lead to my other hand. I'm not sure how I got out of there uninjured, but I did eventually get them both into a stall in the barn.

Note to self: Put all of the bucks into their own individual breeding pens, and if a doe is in heat, do not let her into the pasture after the morning milking!

Blogging ... and a visit from my daughter 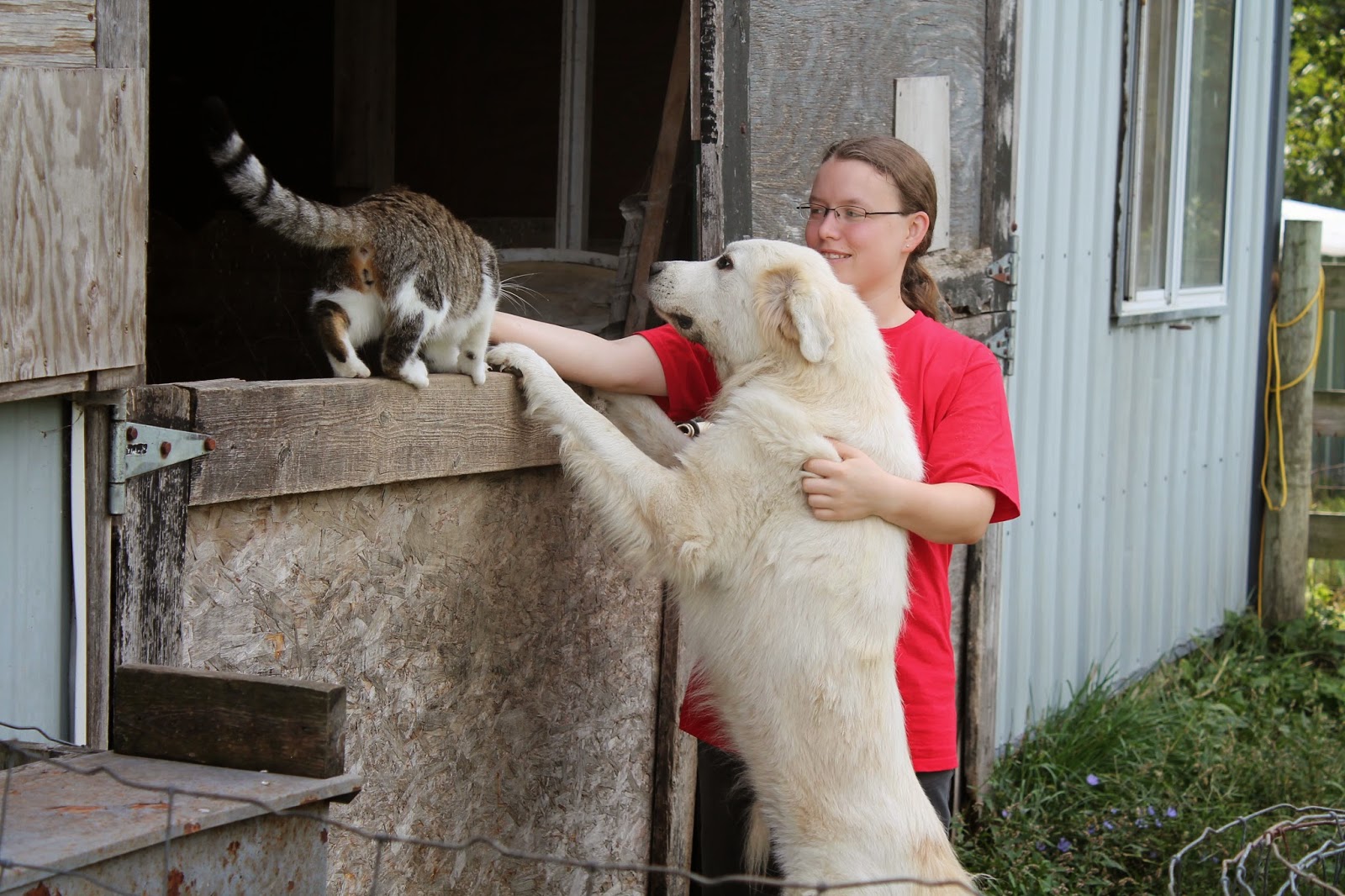 I've spent a bit of time today looking over old blog posts and remembering how much fun it used to be for me to share my day-to-day life with everyone on here. After eight years on this blog, I am currently on track for having the lowest number of posts in any year. It certainly isn't because we don't have a ton of stuff happening around here. I'd have to say that the opposite is true. I always think about blogging when I'm in the midst of something, but then it just never happens. I want that to change. I still love sharing my stories on here! I know I just have to get back into the habit. Now a lot of little things wind up on Facebook, either on my personal page or on the Antiquity Oaks farm page. However, I still love telling the long stories, so I just have to start doing it again! 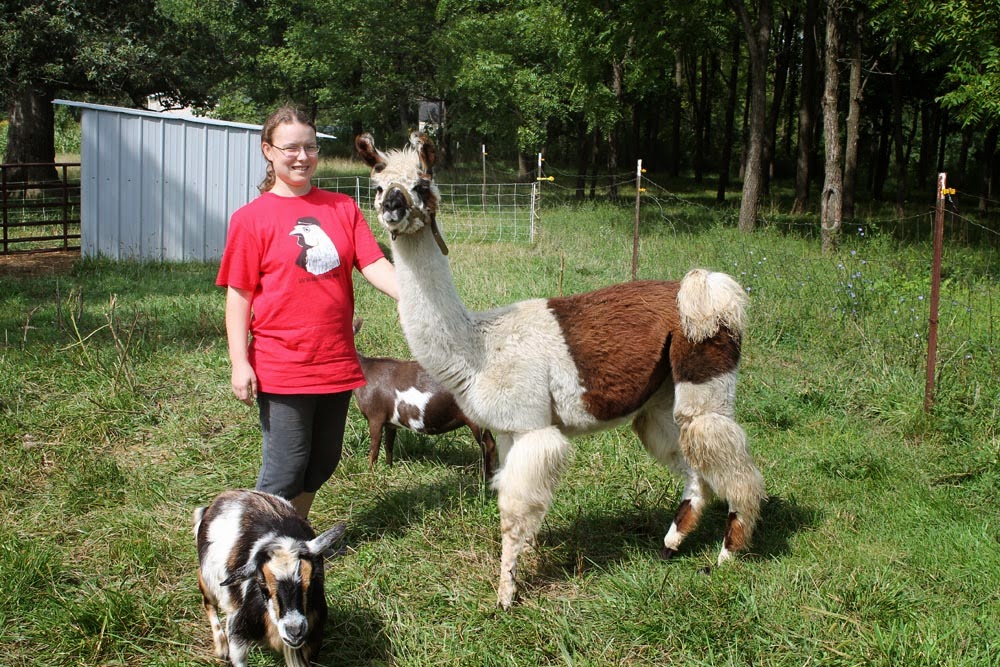 So, here is a little something that I've been meaning to share! Remember Margaret? She was only 14 when we moved out here, and she and her sister could have drowned in the flooded creek when trying to rescue some goats back in 2008. Click here for her version of the story. Today she is an electrical engineer in Ft. Worth, TX, which is a lifetime away from the farm in Illinois! She flew up here to help out with the Homesteading Conference over Labor Day weekend, and while she was here, she also helped me with some website things for the farm. While we were outside getting pictures of the goats for the website, I also got a couple pictures of her with some of the animals.

The Farm Crawl went well last month, and then we had the Homesteading Conference (mentioned in the above paragraph), and then I flew out to California to speak at the National Heirloom Expo, and I came home to cold and rain and two mama pigs giving birth in the pasture -- yes, all of that at once!

I realize this is a terrible excuse for a blog post, but hopefully I'll be back in the swing of this blogging thing soon! Although most of this is not terribly exciting, the saga of the pigs giving birth has been quite the drama, and I promise I will tell you the story soon. And yes, I will have adorable piglet pictures!

Posted by Deborah Niemann at 8:00 AM No comments: 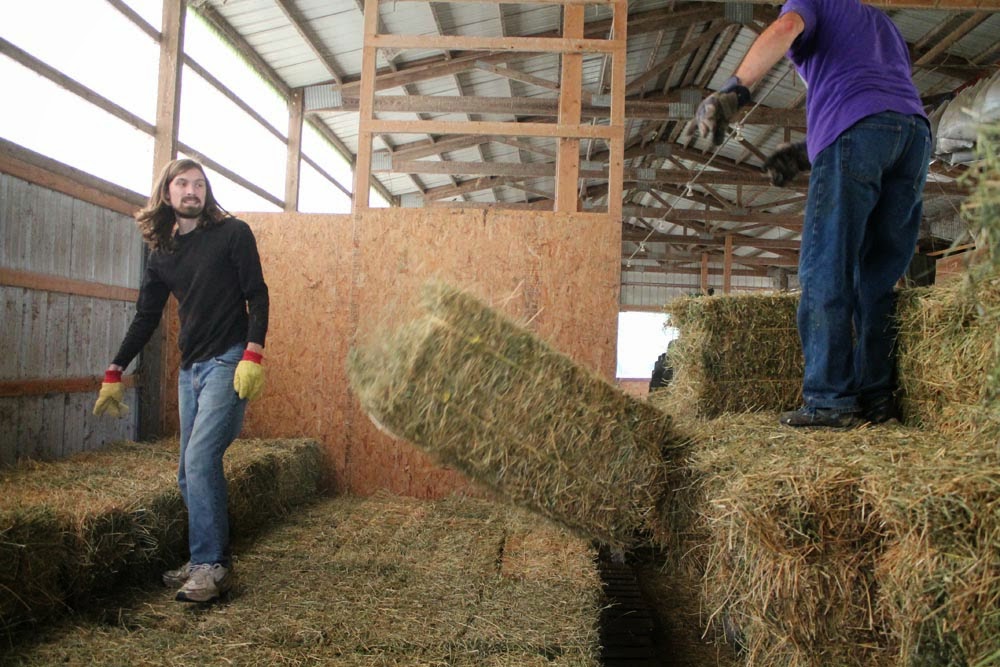 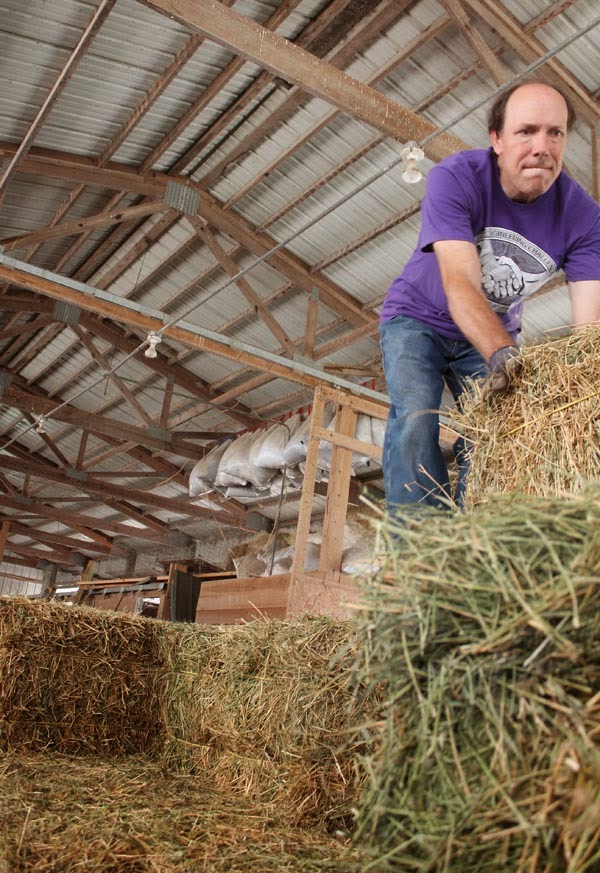 About a month ago we finally got our first load of hay that will feed our animals through the winter. Since then we got a second and third load of hay, so the barn is filling up fast.

Jonathan, who has now gone off to college, helped stack the first load. 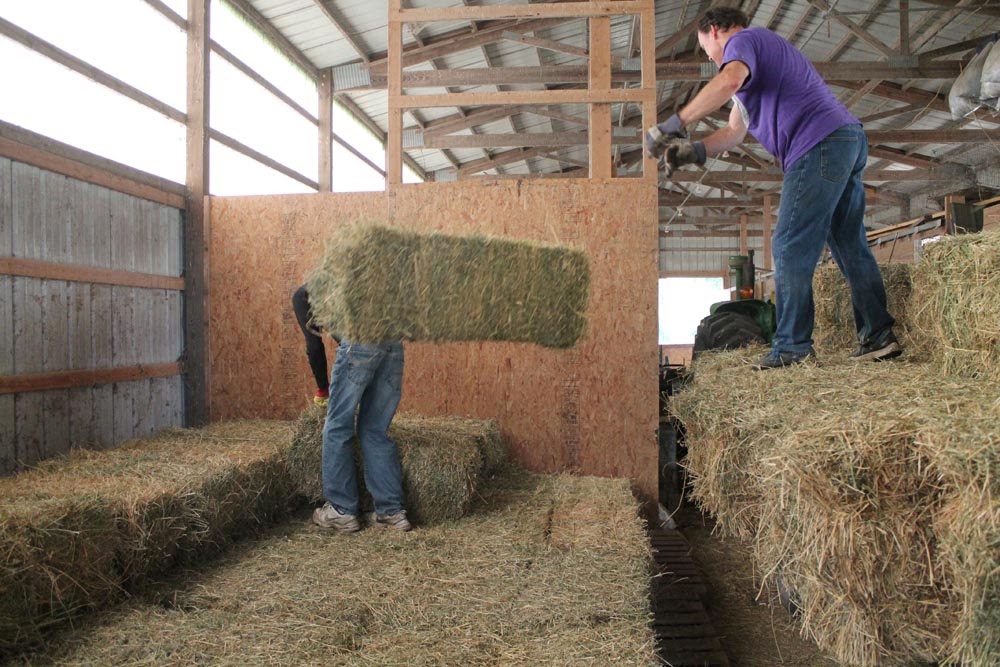 Yeah, I was having fun taking pictures and trying to get all the bales in mid-air. 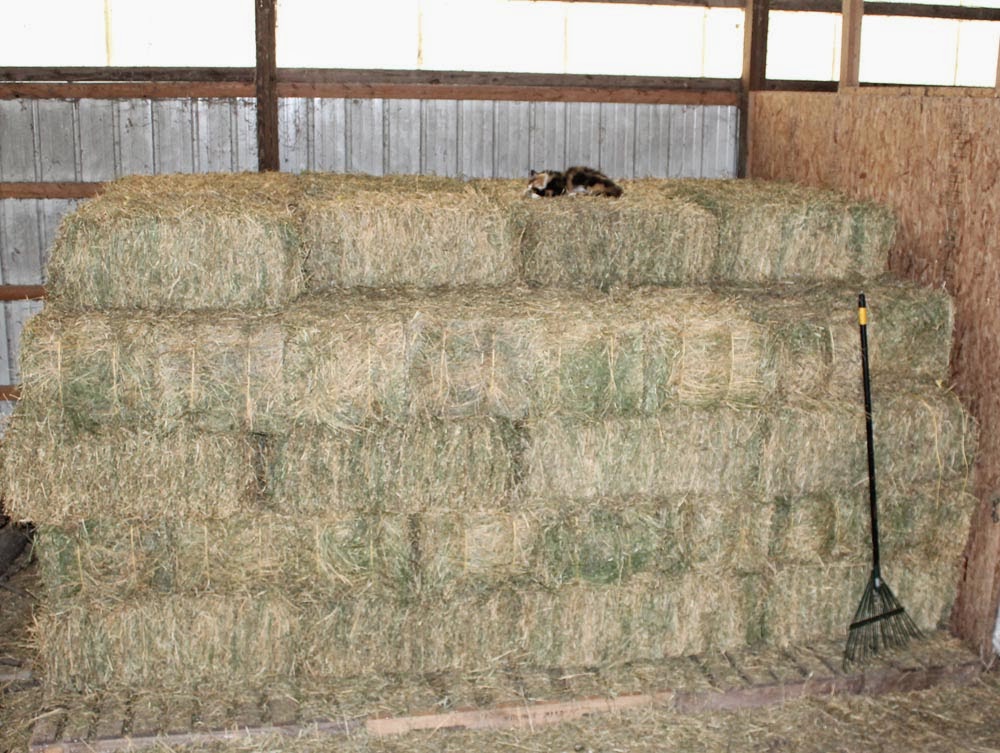 And this is what it looked like when that first load of hay was stacked. You see who immediately took advantage of that hay stack? (way up on top!) 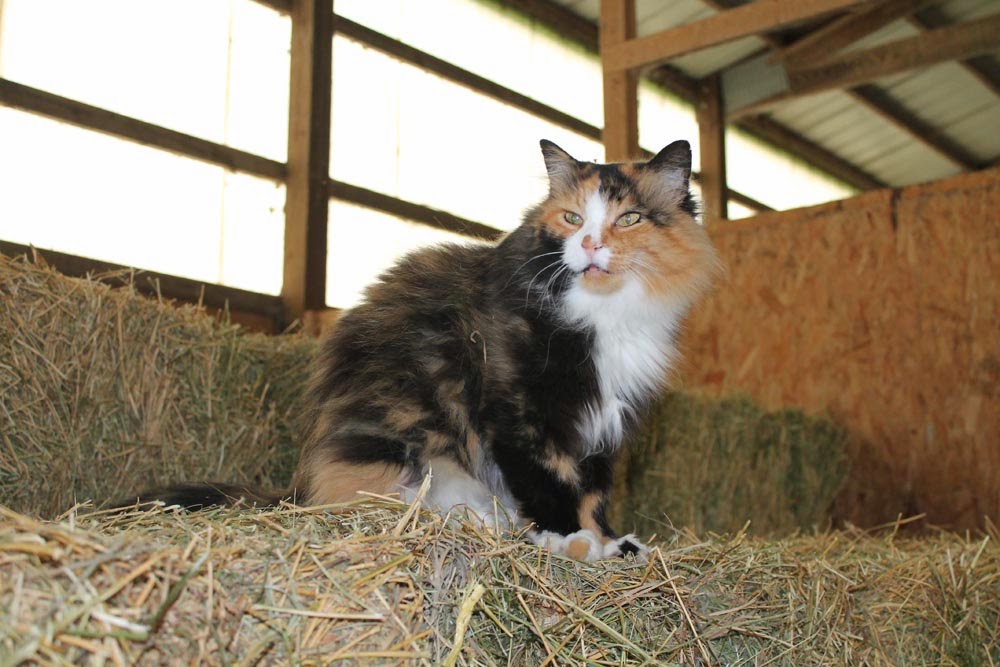 We all know that the real reason barns have hay stacks is so that the barn cats have a place to hang out. This is Patches, our nine-year-old barn kitty who was dumped out here as a kitten.

Since I took these pictures, we've had two more loads of hay, and this side of the barn now has hay up to the ceiling, and the other side is about half full.