Beef, our house, and the new year 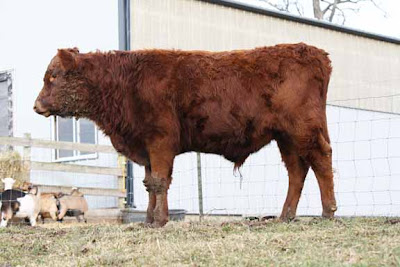 Bridget's and Molly's calves are now beef -- or something between veal and beef. They're not technically veal because veal is supposedly one hundred percent milk-fed, and these boys spent their whole lives on pasture nursing and eating grass the way nature intended. The butcher at the locker said that they'll have more flavor than veal but not as strong as beef.

I'm thinking this is probably what our ancestors thought of as veal. After all, historically animals would have been raised on grass with their mother. Today's veal comes from anemic calves that are fed an unnatural diet of only milk, and they're confined to small pens. It would be really interesting to find a book written more than a century ago on the raising of cattle. I'm sure one is out there. I just have to find it. After all, this really makes perfect sense. Calves are born in spring and grow up eating fresh pasture and their mother's milk. They are never castrated and are butchered before winter sets in so you don't have to start feeding hay. 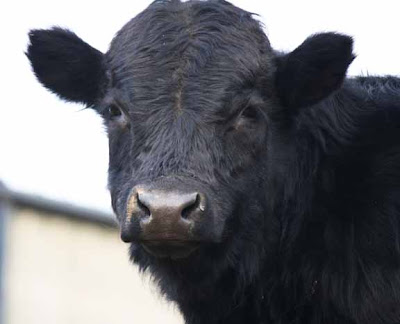 Happy birthday, house!
It's hard to believe that we moved in to our house seven years ago tomorrow -- not because time flies, but because it is still not finished. I can't believe that we have lived here for seven years and have not finished the stairs or all of the trim around the windows and doors. Then again, on a farm there is always so much other stuff to do. And the needs of your animals and garden don't wait. Stairs and trim don't seem very important in the grand scheme of life.

Happy New Year!
Our first goats will be arriving around Jan. 12, and Bridget and Molly will be calving again in April. And my next baby -- er, book, called Ecofrugal -- will be hitting bookstores in the fall! I hope everyone has an outstanding 2012 where all of your homesteading dreams come true!
Posted by Deborah Niemann at 9:48 PM 10 comments:

Worry, doubts, and hay in winter

You don't have to know me very well to know that I worry a lot -- probably far more than is good for me. I once read that worrying too much is just as bad for you as smoking a pack of cigarettes a day. That just gave me one more thing to worry about! I'm doing everything that is supposed to be good for me -- except this worrying thing! But I digress.

What I really want to write about today is the hay situation. Every year I worry about hay -- having enough hay to last until the pastures are growing again, as well as having good quality hay that will keep the animals well nourished and healthy. I wish I understood how hay that looked great in the middle of summer doesn't look so great in winter. I bought hay from two different farms this year, from three different cuttings. They all looked great when I bought them, but now I'm having my doubts about two of them. One is so stemmy that the goats won't eat it unless I feed them in a big group -- then, of course, they all want to get it so no one else does. I love it when goat peer pressure works for me. If there are only three or four goats in a group though, they look at me like, "You expect us to eat THIS?"

We only got 300 bales of the really good stuff, and the goats have already gone through half of that. I'm thinking we'll save the other half for when the does kid. In the meantime, we'll start feeding the stemmy stack. The other stuff smells kind of like pickles. The cattle are eating it though, so I suppose I'll continue to feed it to them. No, I have not sold any of them yet, in spite of what I said.

Every time I go out there to feed them, I tell myself I need to make an appointment at the locker to take in the two young bulls for processing. That would reduce the hay usage quite a bit. But that little red bull is just such a beautiful vibrant red, and he's polled. Honestly, I didn't try very hard to sell him as a bull. I only advertised in a couple of places. But if I sell a bull for breeding, it really should be his father. I'm not sure what kind of meat we'd get from an intact 2-year-old bull, even though I was mentally turning him into steaks the last time we had to bring him home from a neighbor's place a few months ago.

I go through this every winter, even though every summer I feel like I'm buying more hay than ever before. The increase in the cattle population is a big part of the problem. I really did buy more hay than ever before. The front of the big barn was full -- that's a 30-foot by 30-foot area -- as well as another area in the smaller barn. I think I wound up buying about 900 bales total. It's only December, and there is already an open area in the barn that is way bigger than it should be by now.

But the only smart thing to do is to butcher those two bull calves. It is not smart to buy hay in winter. It's always way more expensive than summertime because the hay men know that if you're buying in winter, you're desperate. And the other problem with the hay disappearing so fast is that we do have a lot more goats than normal. Since we were blessed with 29 bucklings this year, only about two-thirds of them were sold as bucks for breeding or wethers (castrated males) as pets. There are about a dozen wethers out there that are also eating a lot of hay.

A few years ago, I didn't think I could ever eat a goat, but that was a few years ago -- long before I found myself standing in the barn wondering how I was ever going to feed all these animals until next spring. Mike butchered one of the wethers a couple of months ago, and the meat was quite good. He really needs to butcher more of them. But we've been procrastinating.

When we first moved out here, I used to feel like the queen of some small country. Coming from a typical suburban lot, our 32 acres out here felt like a small kingdom, and I was suddenly responsible for the lives of a lot of animals. I didn't initially feel comfortable being the one who decided when an animal's life would end. I'm not sure I'll ever be completely comfortable with that idea, even knowing that I am making a responsible decision when it comes to allocating our resources, such as pasture space and hay. But goats and cows have to give birth if you want milk. And as good stewards of our land and caretakers of our animals, we have to have a plan for those babies. If they are not sold, the logical place for them is on the dinner table.
Posted by Deborah Niemann at 5:22 PM 5 comments:

Tonight's dinner was one of those that reminded me why we do what we do. We had shepherd's pie made with meat from the spring lambs. It had a deliciously mild lamb flavor, and I could have eaten until I painfully regretted it, but luckily my son came out with the left-over containers and started putting it away.

After trying a couple of times, we finally got this one right. The first time we butchered lambs, they were a year old and had been castrated. They were 25 to 30 pounds, hanging weight, which is not big.  I remember the woman at the locker saying, "Those chops are going to be dinky!" But they were yummy! We did that for a couple of years, but I knew that without testosterone, they just don't grow that fast.. Last year, we butchered some intact yearling rams, which were 45 to 50 pounds, but had a strong lamb flavor. I was not crazy about that. In fact, the more I ate it, the more I disliked it, and the past few months I've been saying that we should sell the sheep. Then we butchered the spring lambs, which were only about six months old and had not been castrated. Jackpot! They weighed 24 to 29 pounds hanging weight, which is about the same as the yearling wethers, but we didn't have to feed them over the winter. And the flavor of the meat was, I think, even more mild than the yearling wethers.

I announced at dinner tonight that we'd be continuing to raise sheep on Antiquity Oaks. I'm glad I didn't have time to advertise the flock and sell them all. I'd have been terribly disappointed if I had tasted this delicious meat and realized I couldn't have more next year.
Posted by Deborah Niemann at 8:21 PM 7 comments: