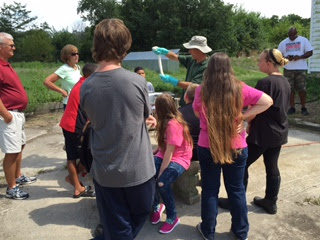 Yesterday was the first day of the Fourth Annual Livingston County Farm crawl, and the weather was about as close to perfect as it could ever be.

Today is day two, and it started out raining! The rain is gone, though, and the sun is coming out, so I think we'll be fine the rest of the day.

If you're in the area, you can head over to see the newly hatched chicks. Mike will be doing a cow milking demonstration at 3:00.

This might actually be the last year. A couple of the farmers are talking about moving away, and the others are just getting tired of doing it.
Posted by Deborah Niemann at 12:53 PM No comments:

It's Sunday, which has become my day for genealogy research. Anyone who has ever delved into their genealogy knows that you could spend all day, every day working on your family tree, so I quickly decided that I should isolate my efforts to Sundays.

I originally got interested in learning more about my genes a few months ago as I started dealing with my health problems. They say that about a third of autoimmune disease comes from your genes and the other two-thirds comes from environmental triggers and lifestyle choices, so I thought it might be helpful if I knew exactly how much the cards were stacked against me. Someone told me about 23andme.com, so I went online to find out how it works.

One of the first things I discovered is that lots of people use the service to find birth parents. Although I was adopted at birth, my parents kept in touch with my mother. However, she had no idea who my father was, and I had always accepted the fact that I would never know ... until now!

The only thing I've ever known about my father is that he was in the Navy and in Washington DC in May 1962. He was probably 18 or 19 years old, meaning that he would now be in his early 70s, assuming he is still alive.

So, a few months ago, I spit into a test tube and sent it off for analysis, and a few weeks later, I discovered I had 935 cousins! Wow! Unfortunately almost all of them are third cousins or even more distantly related, but to go from having almost no relatives in the world to 935 was an amazing discovery! Via email, I met one particularly knowledgeable and helpful cousin in England who told me that if I could get my mum to do the test, I'd be able to split my list of cousins into maternal and paternal side, so I contacted her, and she agreed. I was thinking that the 935 would be cut in half, but it hasn't been quite that helpful.

As it turns out, only 125 of those cousins are related to me through her. The rest are related to me through my father! Holy smokes! That would explain why almost all of the surnames listed by my DNA relatives are English -- Smith, Jones, Lewis, Parker, Wells, and so on. I'm assuming this is because her family came here from Norway and Sweden at the end of the 19th century, whereas my father's family is almost entirely British and obviously came to the US in the 1700s and earlier, so there are simply a lot more of them in this country to get tested. Although testing is available in northern European countries, this is a pretty popular American thing to do. (Plus, there are a lot more people in this country.)

I even have some African DNA in me, which probably means that a couple hundred years ago I had a great, great, great, great ... great grandmother and grandfather who were slave and slave owner. I think I remember reading somewhere that one of Thomas Jefferson's children with slave Sally Hemming had skin that was pale enough that he was able to live his life as a white person, which obviously would have been the case with my ancestor.

Some of my cousins go back to British royalty and one to Pocahontas. That doesn't mean that I do, because it could be a different branch of their family tree than the one we share in common, but I am even more excited than ever to figure out where I fit in the world.

The funniest thing about all of this is that I've been a huge anglophile my entire life. I've visited England twice, and the only TV show I've watched in the last 15 years is Downton Abbey. I've been drinking hot tea since I was a teenager in Texas, and I was drinking it with milk it, which is a very British thing to do. I didn't even know anyone who drank hot tea, much less tea with milk in it back then! I don't even know where I got the idea.

Years ago, I said that since I had no idea who my father was, I was going to make one up. He was British, and his ancestor came to this country because he was the second or third son of an aristocrat, and since he would not be inheriting his father's land and title, he decided to come to America to find his fortune. I needed an excuse for my expensive taste, and royal blood seemed like the most obvious explanation. It's pretty funny that even part of it has been proven true -- his family did come from England! I'm really looking forward to finding out about the rest of it!

Email ThisBlogThis!Share to TwitterShare to FacebookShare to Pinterest
Labels: about me

It's not cute or sexy or fun 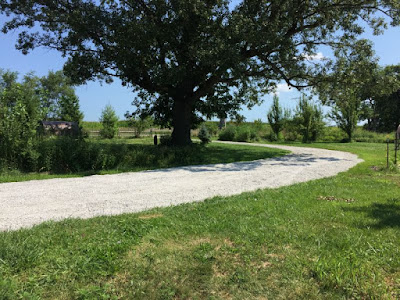 Here is something no one ever talks about on the homestead ... driveways. I'll never forget the day we moved out here, I walked around feeling like the queen of a small kingdom! We had 32 acres! The largest yard we'd ever had in the past was a mere half an acre, so 32 acres was huge!

Well, once the euphoria wore off, I realized that just like the ruler of any small kingdom, the owner of a small farm has to worry about keeping their roads in good repair. And we've not been so good about that the last few years. For at least two or three years, I've been sporadically trying to find someone to deliver more road rock out here. Finally, I got a recommendation from a friend! 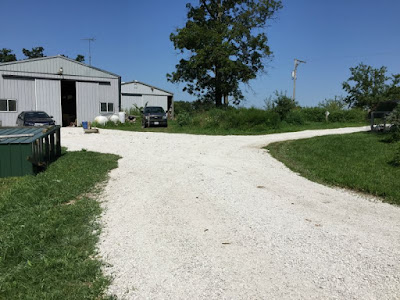 So last Wednesday, we had road rock delivered. The road rock guy was surprised to learn that we didn't have a tractor or a skid loader to spread the rock. So, that meant that it was all spread by a human being -- mostly Mike. Want to know how he stays so thin and muscular? Working on the homestead is a great fitness plan.

We asked the rock guy to "tailgate it," which meant he was supposed to raise the bed of the dump truck and evenly spread the gravel on the driveway as he drove forward. It didn't work as well as we'd hoped. This pile of rock was knee high. 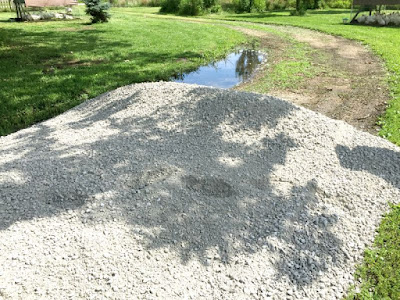 But, that's enough chatter! You really can't appreciate the gravity of this situation unless you see the before and after pictures. I don't think you really appreciate the top photo unless you know that it looked like this before the rock was delivered and spread ... 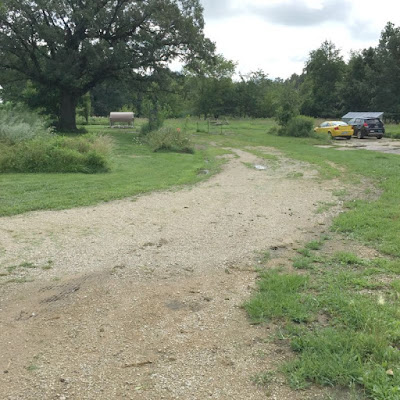 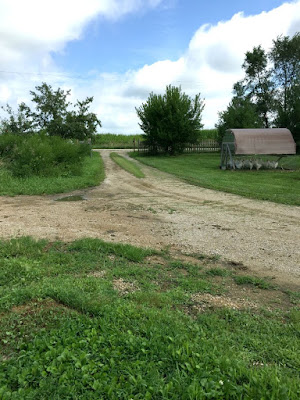 And you can really appreciate the improvement when driving on the driveway following a rain. Oh, yeah! Life will be so much better next spring!
Posted by Deborah Niemann at 5:26 PM 3 comments: