A Christmas to remember 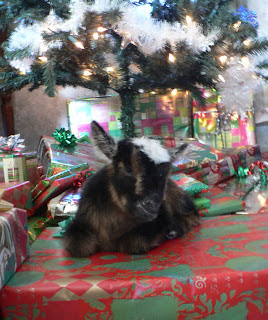 No, I didn't receive some longed-for gift. We did not have a visit from some long-lost relative. We did not even have a meal that was particularly memorable. We did have a priceless experience, although less than joyous. We had our first middle-of-the-night kidding emergency.

The goat's pelvis was so tiny, we couldn't get the kid out, so we took her to the vet, expecting a c-section. He used to raise pygmies, however, so he had lots of personal experience with such problems. He tied ropes to the kid's front legs, and Katherine and I held Giselle and braced ourselves on the opposite side of the table. At times, my brain screamed inside my head, "Just cut her open already! Do the damn c-section!" But I kept reminding myself that he used to raise pygmies and had probably done this lots of times. Finally, after 15 minutes of pulling, a little buck emerged, looking half dead. Katherine squealed with excitement, but as the vet briskly rubbed the kid, he said, "He still might not make it," and then he handed the kid to Katherine. After a few minutes, the limp kid gained some muscle control and was able to hold his tongue in his mouth. We allowed ourselves to get hopeful.

Giselle wanted nothing to do with him. She would not look at him, much less sniff him or lick him like a normal mama goat. When I tried to latch him on to nurse, she acted as if nothing were happening to her udder. Her baby did not exist. So, we have a house goat. He is our first boy in the house, and Katherine is trying to litter box train him. We've trained previous goats to towels, but then realized that they can't tell the difference between a towel and a carpet. Oops. We're hoping this will work better.

After considering St. Nicholas, Kris Kringle, and Rudolph, we finally settled on Nick as the kid's name. Since his mama had such a hard time kidding, he will definitely be castrated. We don't want to pass along those genes. We certainly don't need any more pet goats, but it's going to be hard to let this little boy go!
Posted by Deborah Niemann at 11:04 AM 3 comments: