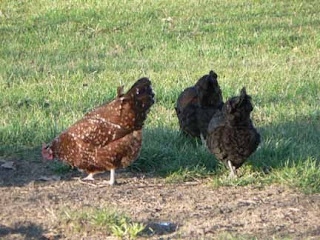 Last week, I ordered 50 New Hampshire red pullets (baby hens) from McMurray Hatchery in Iowa. They'll be arriving next week and will become our new layers in spring 2010. It recently clicked that we are only getting about four or five dozen eggs a week. While that might sound like a lot to you, we have about 45 chickens. That means they're averaging one egg per week. Yes, I knew they were past their prime, but I didn't realize they were this bad. Maybe I just didn't want to face the truth, since I'm very thankful for our hens. They provide us with the most delicious eggs imaginable, but I don't even want to do the math to figure out how much those eggs are costing us at the rate they're laying.

And although I can't tell you who is the worst at pulling their own weight, I can tell you that the Rose-Comb Brown Leghorns are terrible. They are only a year and a half old, which means they're in their prime. They're laying less than one egg per week, which is sadly unacceptable. Most breeds lay at least four eggs per week the first year or two. Some lay an egg almost every day. Leghorns lay white eggs, while the rest of our chickens lay brown eggs, so there is no hiding their inefficiency. Their eggs are also extremely small -- almost as small as bantams -- which means that if a cake recipe calls for two eggs, you need four of their eggs, because they weigh half as much as the brown eggs.

I decided to try the Leghorns last year for two reasons. First, White Leghorns are the breed that the poultry industry has used to create the egg-laying chickens in factory farms, so I assumed they must have started with some good stock. Hmm, maybe not. Makes me wonder how they have reached the level of production that they have with commercial eggs. Second, I wanted a white-egg layer so that I'd know how they compared to my older hens, which I knew were reaching the end of their productive lives and would probably be butchered at the end of this year. It was definitely a good idea, because if the Leghorns laid brown eggs, they'd be sticking around through winter when the rest of the hens go down south. I never would have assumed that they could possibly be such terrible layers. Of course, this is how they perform on our farm. They could be completely different in climates that are warmer or colder.

The chickens in today's picture are a speckled Sussex and two black Australorps. I couldn't get a picture of the Leghorns, although I certainly tried. I went up and down the hill behind the chicken house, through the tall grass and brush, and those flighty little birds continued to elude me. I don't know how a coyote could catch one, but we only have six left; we had 12 a year ago.
Posted by Deborah Niemann at 6:13 AM

Email ThisBlogThis!Share to TwitterShare to FacebookShare to Pinterest
Labels: chickens

I have a large flock of heritage breed chickens that are very docile and easy to work with, but this year I made the mistake of ordering some Mille Fleur Leghorns from Sand Hill. They are beautiful, but as you stated, they are so flighty! I am also surprised at how small they are. No more Leghorns for me!

Thanks for the heads up on the rose comb leggerns.
One of these years, try red stars, or one of the sex links. Our red stars are laying like crazy, HUGE brown eggs.

Could the leghorns be about to go into molt? Ours went around 18 mos....we have two of the dark brown leghorns, and besides from being flighty as you mention, they are pretty reliable layers...

Corrine, When we have the chickens butchered, it will be quite obvious which ones were the leghorns. They'll probably dress out at about 2 pounds.

Juliann, How do the red stars handle temperature extremes? I've heard some negative things about some of the sex link in very hot or very cold weather. One man bought several hundred cherry eggers to start a egg business, and in the hottest part of summer, they started dropping dead.

Melanie, Unfortunately, the leghorns have been terrible layers all along. They laid almost nothing their first year, and all the eggs were bantam-sized. They laid well in March and April and then pretty much shut down. We now see a white egg every week or two. I know the white industrial layers are amazing, but I think they're VERY distant cousins of this variety. Are your brown Leghorns rose-combed? Maybe there's a difference. Leghorns are traditionally single combed, but in our cold winters, they'd freeze off.

Each time I think of you guys having to slay some of your animals, I cringe - until I remember how much I love fried chicken, chicken and dumplings, steak, bacon, etc..... :)

Nancy in an Iowa apt.

I love your blog...Joyce sent me here awhile back. We just got chicks for the first time and some roosters were sent along with them. We plan to butcher them which we have never done before. I can't wait until we start getting eggs.

Welcome, Judy! Yes, the hatcheries always send a few roosters in your pullet orders. You'll love the taste of home-grown chicken, as well as the eggs! You can't go back to store-bought eggs after eating your own.