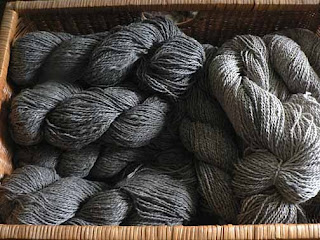 I really should stop saying that I'm going to write about something "tomorrow," because that seems to be a siren to the universe to hit me with something big, which is sometimes good and sometimes not so good. Yes, this means the acorns will have to wait another day.

This summer we decided to have some of our Shetland and llama fiber professionally spun, so we could expand our yarn offerings. Poor Katherine does a great job, but I've got her busy spinning up Teddy and Latte for me, so I can finish my afghan-turned-bedspread. Anyway, the yarn finally arrived, which is a good thing, right? Not so fast . . .

It was like Christmas morning, opening the box and then the bags inside the box, seeing all of my beautiful yarn, feeling its silky softness . . . and then it was like finding a piece of coal in my stocking. In one of the bags, I found a business card for another farm. Hmmm . . . what's that doing in there? Then I realized I couldn't find Dolce's fiber. He's a brown llama, and there was no brown in the box. So, I figured Dolce's fiber was accidentally sent to the farm whose business card was in the box, and perhaps I had some of her fiber. We could switch, and all would be well with the world again. Not so fast . . . 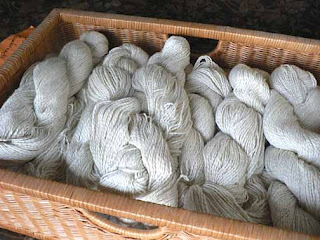 The skeins from these two are mixed together and combined weight of yarn is 6.5# (almost a pound less); Kitty's yarn is not identified, but if we assume that her fiber is missing, then it's 1.3# more than the Tuscany/Fairy blend, so Kitty's skeins of yarn are probably somewhere in this basket of white yarn.

Sterling (llama) and Rambrandt (ram) dropped-off 4#
received 5.75# of yarn (almost two pounds more) The dark, sweatshirt gray yarn (pictured at top) weighs 3#, which is 1# less than the drop-off weight of the two boys. There are three skeins of slightly lighter gray that have flecks of brown in them, which weigh 1.7#. There are two skeins of light gray/white/brown (on the right side of the top photo) that weigh 1.1#. There was a piece of paper with a card in this bag that says the incoming weight of someone else's llama was 1# 7 ounces (almost 1.5#). I'm thinking all of this was spun together, because there is only one end skein (a short one), and it is the sweatshirt gray. If we subtract 2.8# from the 5.75#, we are just about at the 4# that we dropped off.

Confused? I was. Bottom line is that quite a bit of my fiber is missing, and apparently I have someone else's fiber. Also, I have no idea which white yarn is pure Shetland and which is a Shetland/llama blend. I guess it's good news that my Shetland is that soft, but it's not easy to sell if I can't tell someone what kind of fiber they're buying. The best news is that I figured out I have Dolce's fiber. It's such a dark brown that it looks black if it's not in the sun. I emailed all these details to the carding mill yesterday and am hoping they can figure out whose fiber went where.
Posted by Deborah Niemann at 8:46 AM

Boy, you are NOT having a very good week, are you? So sorry!

That does seem a bit confusing. I hope you get it all worked out.

Oh boy, I got confused just reading your post. I hope next week is better for you.