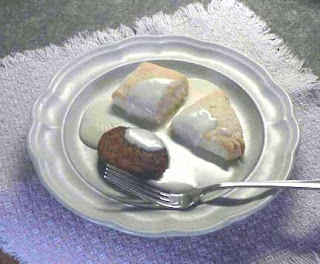 But I don't have time to make biscuits for breakfast!

In my tiny little unscientific poll, the majority of people said they had 5 to 15 minutes to devote to making breakfast. And yes, you can make biscuits in less than 15 minutes. When I first started making biscuits it took me just a smidge under 15 minutes. Now that I do it a couple times a week, I can do it in less than 10 minutes, which is less time than it takes to preheat the oven.

First, here are the directions for those of you who have 10-15 minutes. Preheat the oven to 400 degrees. Put the following ingredients in a bowl and mix with a spoon:

Then, using a pastry blender, cut into the flour mixture -- 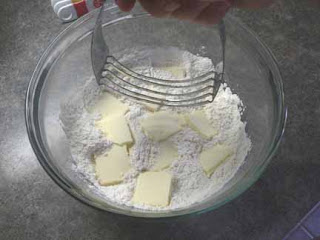 For the uninitiated, a pastry blender is this little doohicky. It's used to "cut" solid fats into flour.

If you want to cut calories, you can use only two tablespoons of butter, but a half stick gives the biscuits a nicer texture.

Once the flour and butter look like crumbles, add -- 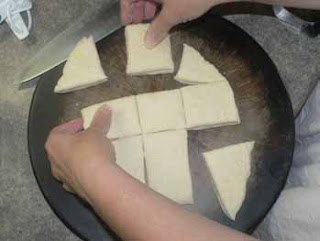 If the mixture gets too challenging to mix with a spoon, stick your hands in there and start mixing. Once the dough has formed a ball, I like to flatten it, fold it in half, then flatten it, fold it in half, etc., about eight or ten times. This is what creates "flaky" biscuits with layers. If the dough is sticky, sprinkle a little flour on it. Then flatten the dough on your baking stone or cookie sheet and cut into shapes. If you have a biscuit cutter, you can use that, but I prefer just cutting them with a knife.

Stick in the oven for 15-20 minutes. I usually turn off my oven at 15 minutes and let them sit in there for another five minutes, saving a little propane.

Now for those of you who only have five or ten minutes in the morning -- Mix up the flour, baking soda, and salt, and cut-in the butter the night before. Stick it in the fridge overnight. In the morning, pull out the bowl, add the buttermilk, and you're ready to pop them into the oven in less than five minutes.

Do I really have to use buttermilk?
No, but it tastes better if you do.

Can I use whole wheat flour, rye flour, corn flour, etc?
Yes, you can substitute equal amounts of other types of flour. I'd suggest using at least one cup of unbleached flour, unless you are already accustomed to eating whole grain flours.

What if I don't have a pastry blender?
I've heard that you can use two knives (one in each hand) and just keep slicing through the mix until it looks crumbly, but I've never tried it. Even though I do have a pastry blender, I slice up my butter when I put it into the flour mix, so that there is less cutting to do with the pastry blender.

Another option is to use 1/4 cup of vegetable oil instead of butter. I used to do this all the time, and if I'm out of butter, I still do it. It doesn't taste as good, but it works.

How often do you really have biscuits for breakfast?
About two or three times a week.

Doesn't it get boring?
No, biscuits are quite versatile. You can slap a little jam on them, make gravy for them, or make little sausage burgers with them. You can also make garlic-cheddar biscuits by sprinkling garlic powder in the mix and adding 3/4 cup of shredded cheddar cheese to the dry mix before adding the buttermilk.

Gravy? Did you say gravy? Do you have a gravy recipe?
Sure! In a skillet over medium heat, whisk together 2 T. fat (butter, bacon drippings, vegetable oil, whatever) and 2 T. flour. When it starts to bubble, add 2 cups milk and continue stirring until it bubbles and thickens, which takes less than five minutes. If you like thicker gravy, add less milk.
Posted by Deborah Niemann at 1:43 PM

My Grandma always made 'tea biscuits' she called them and taught me how to make them also. I love the cheese kind and we would sometimes make sweet ones with a little sugar and raisins added.

That reminds me -- my daughters love to sprinkle sugar and cinnamon over the top of the biscuits before they put them into the oven.

I'm back! I think what you call cookies we call biscuits.

Hey, Dogbait! Glad I included a picture of my "biscuits!" Of course, my husband and kids wouldn't object at all if I served cookies/biscuits for breakfast. What do you call these things we call biscuits? Or do you even eat such things? Scones are similar but also have eggs and a bit of sugar in them.

They look like shortbread's to me but I ain't the cook around here! We'd probably call them a cake than a biscuit.

I've been catching up with your old posts and I was shocked to read about the dog biting your daughter. A you know from my nickname, my previous job brought me into constant contact with dogs and I was bitten 5 times but never as bad as that. It was always interesting to analysis the owners and their reactions which varied from indifference to great concern and being confronted with a major problem for the first time and then how to deal with it.

That is something you seem to have done very well.

I have the same plates at my house! HAHA