New home for the sheep

We finally got the east pasture fenced for the sheep. Last night was a lovely comedy of errors as we tried to herd the sheep through a variety of trails to get them to go their new pasture, but they are creatures of habit, and they really did not want to head through any gates that they had not gone through before. Yes, last spring they were gallivanting all over the countryside, going through fences and gates of all sorts. I can't say that I completely understand how sheep think. 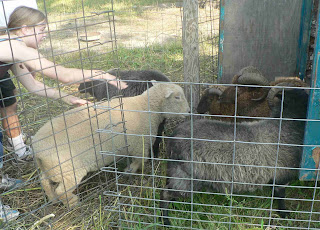 As the sun was setting last night, Porter got the sheep cornered, and we resorted to either carrying them or leading them individually to a holding pen where they could be loaded onto a trailer this morning. So, this morning, we resorted to the 20th century sheep moving technique of trailering. They didn't seem to mind too much. 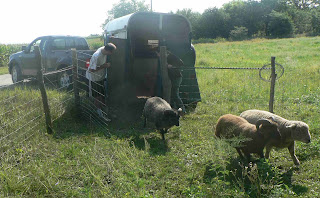 (Yes, there is a single babydoll sheep in my herd of Shetlands.)

They were a little shy about getting out of the trailer once they arrived at their new home, but once one hopped out, the others were fast to follow. We had to take them in two separate trips because we just have a small two-horse trailer. 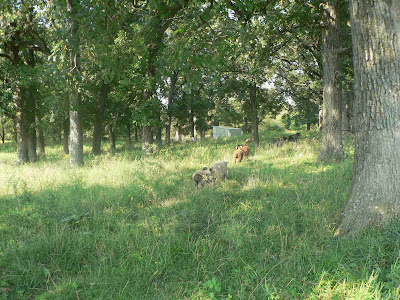 And they really seem to love their new shelter. Or maybe they're just a little freaked out by the new place, and the shelter seems safer than the wide open woods? 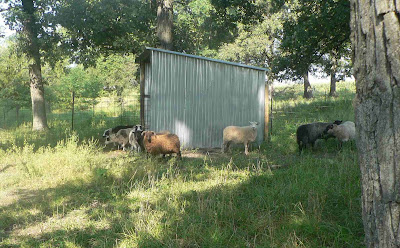 In a couple weeks, we need to separate rams and ewes into breeding groups! And yeah, we have to figure out how to get a couple llamas over here. That's why we wound up trying to move the sheep last night. We were trying to catch the llamas first, and that did not go well at all! So, you'll be hearing more about llama moving in a few days ... or a week ... or ... Anyone got any suggestions for catching llamas?
Posted by Deborah Niemann at 10:16 AM

How big is the area you're trying to catch the llamas in?? It's easiest to make a smaller "catch" pen, inside the big pasture, and herd them into there. The other suggestion would be to use stock sticks - to "lengthen" your arms - and herd them into a corner. Once there, you should be able to halter and load them pretty quickly.

The llamas are in a pasture that's a couple acres. The previous owner told us to use a lead rope to make a catch pen. Basically, we attached the lead rope to one fence in the corner, and we lured them in there with grain. But the little stinkers just ducked their heads under the lead rope and walked out.