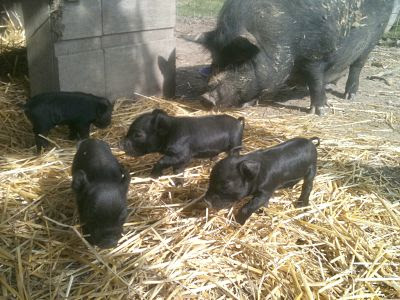 As I was laying in bed last night around 8:30, trying to convince myself that no one's head ever really exploded from a migraine, my son Jonathan burst into the bedroom panting and blurted out, "Piglets! In the chicken house! Four or five are already nursing, and I think I saw another one pop out!" He said something about getting a towel to wipe off a couple that seemed especially dirty, and he was gone again. 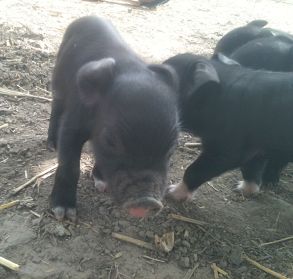 Of all the hours she could have given birth, she waited until I was incapable of being there. Talk about rotten luck! A bit later I got reports from daughter Katherine, who couldn't stop squealing about how cute they were, and husband Mike, who told me he tried to take a video but it was too dark in the chicken house at sundown. Both asked if it was okay that some of the piglets had a white foot or two -- and it is. Being one of the oldest and rarest hog breeds in the U.S., guinea hogs don't have a lot of strict rules about appearance, although the majority of guinea hogs are solid black today. 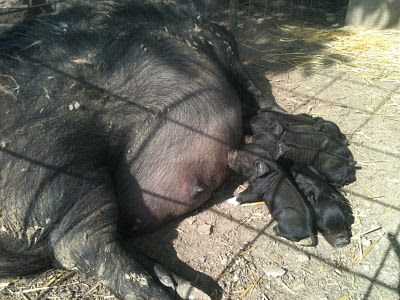 This morning, in spite of a lingering headache, I got myself out there to check out the new additions. Julia had followed Mike to her own little house when he went into the chicken house this morning. None of the babies followed, so Mike put them all in a box and took them to the pig's area. Piglets remind me more of human babies than any other livestock the way that they nurse until they fall asleep, and then if they accidentally fall off the teat, they wake up immediately and start looking for it again! 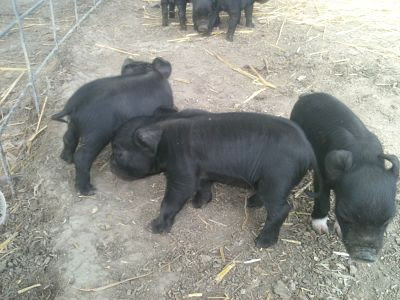 The final count was nine babies -- four girls and five boys. Unfortunately, two of the girls (gilts) were dead this morning, just laying there peacefully near their mama without a sign of anything wrong. One of the other little girls is not the most clued-in about nursing, so I'm wondering if her sisters had a little trouble also getting the hang of it. While six of the piglets were nursing this morning, she was hanging out in the little house, so we took her out several times and kept putting her back on the teat. Although the nine piglets were in a variety of sizes, there wasn't a real runt in the litter, so that's a good thing.

Because the guinea hogs are an endangered breed, we'll be keeping the girls for breeding as long as they don't show any undesirable traits. Some of the boys will wind up as pork, but a couple of the nicer ones will probably be sold for breeding.

About the piglet prognostication give-away -- not a single person chose August 2! But two people guessed August 3, and that was Penny and Miss Effie. Penny said ten piglets, and Miss Effie said six, so Penny is the winner of the goat milk soap. Drop me an email Penny (deborah at antiquity oaks), and I'll get your soap in the mail right away! Thanks to everyone for your guesses!
Posted by Deborah Niemann at 10:35 AM

Email ThisBlogThis!Share to TwitterShare to FacebookShare to Pinterest
Labels: pigs

Congratulations on all the babies. I hope everyone else thrives! I miss my Holly and Ivy...

Oh gosh, oh gosh...are they ever cute! So glad that you finally have piglets!! (I'm sure mama is happy too!)

This is the week for Heritage pig births for sure ! Our endangered Red Wattles are doing very well just 40 or so miles south of you. Yeah for Central Illinois pig farmers.

Beautiful litter you have there. Tell mama "well done"

The soap arrived yesterday and it is fabulous! My mailbox smelled so wonderful. The bars are so generously sized I plan to cut them in two and share with the ladies in my family.
Thanks again!!