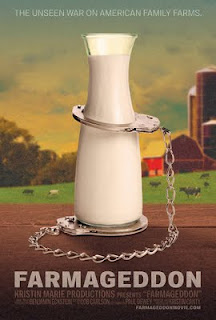 It sounds so absurd that everyone who hears about it assumes there must be more to the story. A family in Ohio is held at gunpoint for hours because they run a natural food buying club. After three raids, a California goat farmer sells all of her goats for fear of losing them. After a year of quarantine, a Vermont dairy loses all of its sheep -- not to a disease or a bear or a common thief, but to the same bully that held the Ohio family at gunpoint and harassed the California farmer -- the U. S. government. No, there were no illegal drugs. There were no illegal guns. There was nothing illicit, yet these law-abiding citizens were treated exactly as if they were producing and selling deadly street drugs to children. What were these people doing that caused SWAT teams to descend upon their farms and point loaded weapons at their children? They were selling raw milk. Yes, raw milk.

Saturday, Mike, Margaret, and I went to Chicago to see the documentary Farmageddon, which is about the government's harassment of farmers who sell raw milk. I had heard most of the stories before, but I always had a few lingering questions in the back of my head, and this movie answered them and gave me lots more information. Throughout the movie we meet farmers who are intelligent, articulate, and educated -- two of them have PhDs -- and we learn over and over again that the FDA and USDA harassed them without cause. No one died. No one even got sick. There were no lab test results indicating that someone might get sick. There was simply a bureaucrat who decided that another small farm needed to be shut down. Since 1970, 88 percent of America's dairy farms have disappeared, and they have been replaced by corporate-owned factory farms.

Since this harassment started, farmers have been getting smarter and started connecting over the Internet to share their experiences and advice. Unlike the sheep farmers who naively complied with the USDA's demands a decade ago, thinking that they could work through the system -- only to have the USDA take their sheep and kill them ten days before their hearing in a court of law -- today's farmers are fighting back, taking videos and pictures of the raids and calling friends and customers to serve as witnesses to the raids. Filmmaker Kristin Canty used a lot of this footage in the movie so that we could see exactly what is happening. It is scary and shocking and infuriating.

It is scary to me as a person with milk goats who sells a small amount of milk legally in my state. It is shocking to me as a person who believes that justice will prevail. And it is infuriating to me as a tax-paying citizen that literally millions of dollars has been spent on surveillance of innocent farmers who are merely trying to make a living doing what they love and what they believe in.

No one is saying that all milk should be raw or that pasteurization should be abandoned. They are merely saying that as free people, we should be allowed to choose. As one woman says in the movie, she could have legally smoked cigarettes every day when she pregnant and no one would have tried to stop her, but she can't buy raw milk in her state. Why do some states make raw milk illegal when it is perfectly legal for corporations to sell us edible food-like substances with ingredient lists that read like chemical formulas rather than recipes? They say it is because raw milk can make people sick, but that's like saying the sky is blue. ANY food can make you sick if it is improperly handled, including pasteurized milk. In the last few years, people have died from eating tainted spinach, green onions, peanuts, and most recently, strawberries! And no one was arrested in those cases. The reality is that milk produced in a factory farm needs to be pasteurized, but that's a discussion for another day.

We attended a special showing of the film at the Gene Siskel Center in Chicago that started with a meet-n-greet prior to the film screening. We were lucky enough to meet Canty and talk to her about why she decided to make the movie. I knew this was her debut film, but the amazing thing is that she had no experience or education in film making. She was "just a mom" of four children, one who had very bad allergies, and when she started buying raw milk, her son's allergies disappeared. When she learned about the harassment of raw milk farmers, she told friends about it, but no one believed her. Everyone said there must be drugs or guns involved or something besides milk. Then she started writing letters to film makers, telling them they should make a movie, but this was when Food, Inc had just come out, and everyone was telling her that the world wasn't ready for another food movie. So, Canty decided to make the film herself because it was a story that had to be told.

In the Q&A after the movie, Canty said that although the movie is in limited release, some key people are seeing it, and it looks like it will be showing on Capitol Hill soon. She also heard through the grapevine that Big Ag is planning to start spending millions to fight the negative images presented about factory farming in movies like Food, Inc and Farmageddon. So this is what it's all about -- money. Rather than improving their practices and their own farms, which would result in a healthier planet, healthier animals, healthier food, and healthier people, they are planning to throw a few million at marketing in an attempt to convince consumers to continue buying their products.
Posted by Deborah Niemann at 4:00 AM

I think we have the corporate owned dairy farms to thank for the government harassment of small farms.
It's the same with so many things. You can't sell to more than "X" number of people or your kitchen has to be certified, and on and on.
Corporations and slick politicians are who I blame. They have all but killed small home businesses. It makes me angry and I don't even have one.

Don't forget all the corporate 'raised' eggs that were problems recently.

So this is what it's all about -- money.
That's it, exactly. For corporations, politicians and departments like the FDA who have no business making regulations when they don't answer to anyone.

Sorry. Basically I agree with all you said. It's frustrating, annoying, and scary. It's what you'd expect in a communist country, not the United States of America.

Saint Louis, MO is being inundated with beautiful billboards with pictures of what looks like family farms, promoting Monsanto. The fight to remake their tarnished has started.