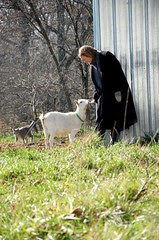 Lizzie the goat and Deborah
Originally uploaded by Antiquity Oaks
The problem is that one of my bucks doesn't appear to be very virile. Frankie didn't seem to be all that excited about breeding the does, and the does are now coming back into heat. Today, Lizzie was in heat, even though she'd been bred to Frankie already. I decided not to waste any more time on Frankie and instead to breed her to Pegasus, whom she'd been bred to a couple years ago -- and produced gorgeous babies. Simplest thing in the world, right? Just go put a couple little love birds together. Simple is not the word to describe how my afternoon played out.

Margaret is home from college and was the only person home at the time I looked out the window to see our wether (castrated male) mounting Lizzie. She was standing there, obviously in heat, perfectly content to have him all over her. After getting over my initial frustration that she was not bred, I told Margaret I needed to go outside and put her with another buck to get her bred. Margaret volunteered to help, because my back has been problematic lately, and she didn't want me hurting myself. Really? (If this were literature instead of real life, I should have seen that as foreshadowing.)

So, we take Lizzie out of the does' pen, and we get Pegasus from the stall at the end of the barn. He was very happy to get to work making babies right away, and I told Margaret we should put them in a stall for the afternoon to make sure she was bred. As it turned out, there was a spool in that stall (you know, the thing electrical cables are wound up on), and I'd forgotten something about Lizzie. She has the distinction of being the only doe I've ever owned who is a jumper. After about 10 minutes, she came flying out of the stall. Maybe she didn't like Pegasus's cologne or something. I put her back in there and moved the spool that she had used to launch herself. A few minutes later, I screamed as I saw her head and three legs clambering over the stall door. I was close enough that I was able to push her back. And I was worried enough about her breaking a leg in her next attempt, that I told Margaret we had to stand there for as long as she was in that stall.

I suppose I need to insert an explanation here about Nigerian dwarf does. While most people assume that animals are perfectly content to mate any ol' male when in heat, this is not true with Nigerians. They have a reputation for being rather persnickety about whose kids they bear -- and I am not the only person to have made this observation. Lizzie was clearly in heat -- tail flagging, making strange noises, and allowing the wether to mount her are all signs that she is definitely in heat. Georgie, the wether, doesn't know that he's not a real man, so he just keeps trying, and Lizzie was perfectly content to stand there and let him try.

Clearly, Lizzie had decided that Pegasus was the most despicable male she'd ever laid eyes on. So, before she broke a leg in her attempts to escape, we decided to put her back with the does. Besides, the buck had gotten lucky at least three times, so hopefully she was bred. I told Margaret, "Just take Lizzie to that second stall door, because Pegasus will follow her, and we'll be able to put him away." Clearly, I should have added, "AFTER we put Lizzie away!" because Margaret thought I wanted to put Pegasus away first. Do you see the problem with this picture?

Okay, maybe you don't see a problem yet, because I haven't told you that Draco was in that stall that we needed to put Pegasus into. And Draco knew there was a girl in heat right outside the door. He had already tried a few times to jump out of his stall. So, as soon as Margaret opened the stall door to put Pegasus in there, Draco tried to escape! He went running right between my legs, so I snapped my knees together on his shoulders. I attempted to take baby steps forward with him between my knees, and believe it or not, I actually got him back in the stall! But the second I let go of him, so Margaret could put Pegasus in, Draco shot out again! He did not make the same mistake of running between my legs this time, but I was able to grab his collar and stop him -- but only for a second. It all gets kind of blurry at this point, but the next thing I knew, Draco and Lizzie were both loose!

I started screaming, "No!" over and over again, as if that would stop him. I grabbed Lizzie's collar with my left hand and put my right hand over her back end. I get the feeling that Lizzie liked Draco, because she moved away from my hand, so unless I wanted goat kids of dubious heritage, I only had one choice. I dropped to my creaky old knees behind Lizzie to completely cover her back end with my body while hugging her around the neck, so that it would be impossible for Draco to do the deed.

I was laughing so hard by the time Margaret got the bucks locked up. She couldn't see my face though, so she wasn't sure if I was laughing or crying. Since Draco had not been successful -- and my knees had landed on soft straw when I dove on top of Lizzie -- it was hilarious. I wasn't hurt, and Lizzie had been bred by Pegasus and only Pegasus. We put Lizzie back with the does, and I said to Margaret, "Don't you miss this?"

Now, I just have to mark the calendar and wait 147, plus or minus a couple days.
Posted by Deborah Niemann at 7:35 PM

thanks for the smiles :)

I was thrilled to get bloodwork back a couple of weeks ago showing all 8 Nigies were pregnant and CAE negative. I had two that absolutely hated the buck I bred them to (they wanted the minimancha buck instead) -- one of them only let him mount her once and even then she was walking away while he was on her back. They looked like they were doing the Cha-Cha. Goats are fun, but Nigies are a special kind of fun :)

Sad to hear about your back; great story though. LMAO

Was it wrong of me to laugh. Not out loud though. Great story.

Kathy, yes, Nigies are a special kind of fun!

I'm glad you got a chuckle, Annette and Candy. It really was funny.

Wow! Life at Antiquity Oaks sure isn't dull. I, too, laughed when I pictured your description of how you kept Draco from breeding your little Nigerian. You were very brave, is all I can say.