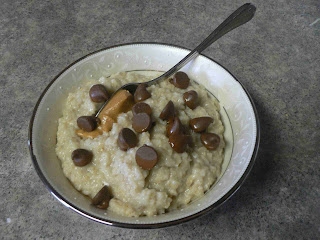 A few months ago, I wrote about making biscuits for breakfast a couple times a week. Well, that's when we have plenty of milk, because I make my own buttermilk, and the best biscuits are definitely buttermilk biscuits. We don't usually buy cereal, except for granola to mix with our yogurt, but we don't have yogurt this time of year either. In the middle of winter, when we're low on milk, breakfast is usually cheesy grits or oatmeal. I know some of you are thinking, "Ugh!" But let me explain!

Although I am originally from the south, I never had grits until I lived in Connecticut. There was a restaurant in Old Lyme (I think) that had the most glorious Sunday brunches, and that is where I was introduced to cheesy grits. The original recipe called for making grits according to the package directions, then mixing them with cheese and eggs, placing in a buttered baking dish, and baking for half an hour or 45 minutes, which is really a long time to wait for breakfast. Fairly quickly, we figured out that cheese was the key ingredient, so we just started adding cheddar cheese and garlic to the grits on the stove. Stir until all the cheese is melted, and spoon into bowls. It's delicious!

I never really liked oatmeal, except for the artificially flavored packets, and when I cleaned up my eating habits, those were verboten, because of the high sugar content and artificial flavors. However, oatmeal really is a healthy and quick breakfast. I don't know where I got the idea, but for several years, I have been adding a spoonful of peanut butter and a small handful of chocolate chips to the oatmeal. If you're a chocolate and peanut butter lover like me, give this a try. And before you decide that this is too high calorie, 16 chocolate chips only add 70 calories.
Posted by Deborah Niemann at 6:04 AM

Mmmm, porridge with a good spoonful of honey is my favourite breakfast :o)

I know what you mean! I would never eat oatmeal for anything! And now -- a day never goes by without it. Unless I eat granola .....which I love to!

I'll have to try the chocolate chips and peanut butter. That sounds like YUMMM to me!

What an idea! I love it! I'm trying that tomorrow. I never liked the packet oatmeal - I always thought it had hints of package glue to it. I make mine with cranberries (dried) or dried cherries, and sometimes I mix in pecans, walnuts, or coconut. Now I have a new option! It's the perfect time of year for it too!

And Claire, welcome to the blog, and thanks for suggesting cranberries and all those other wonderful additions. I'll have to try those!