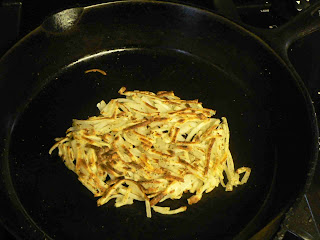 Cooking with less fat does not necessarily mean that you have to use non-stick cookware, as in Teflon. I don't like non-stick cookware, since I could never find one that didn't eventually start flaking. And I don't like the idea of eating some unknown substance. Since I need to lose weight and have been paying attention to what I eat, I have been utilizing my cast iron cookware properly.

What does "properly" mean? Well, like most Americans, I am usually too busy (or think I am) to cook my food slowly. And slow is the secret to using cast iron skillets. Once your cast iron is seasoned, you only need to spread the tiniest amount of oil on the surface when cooking anything -- even things like potatoes, which would normally stick. What's a tiny amount of oil? Pour out enough to cover an inch of the skillet, then use your fingers to spread it evenly across the surface. (You could also use an oil spray.) Cook the food on low heat, and it doesn't stick. It takes 15-20 minutes to cook my hash browns in the morning, but I think it actually takes less of my time than it did when I was cooking it on a higher heat. Cooking it on low means that I can leave it there for about 7-8 minutes, come back, flip the potatoes and leave for another 5 minutes or so. When I was cooking it on a higher heat, I had to stick around and keep flipping the potatoes, so they wouldn't burn -- not to mention how much extra oil I had in the skillet.

The best thing about cast iron is that it lasts almost forever. And since so few people know how to use it properly, you can often find it cheaply at garage sales.

Easy Hash Browns
Shred one small potato and put it in your greased cast iron skillet on LOW heat. Sprinkle with garlic salt and pepper. (Depending on my mood, I might use black pepper or cayenne.) Flip when the outer pieces of potato are starting to turn golden. Cook that side until you peek underneath and it looks golden also.

I would like to invest in a cast iron grill pan and you are right about the nonstik pans. I have never liked them either.

I've just unearthed mine to try and start cooking healthier. It's a learning experience, but the flavor of the foods is so much more rich. It's really amazing. Thanks for the tips, since I'm really a newbie at using mine.
Tammy