The best laid plans of a homesteader 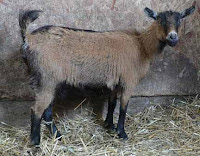 My plan for Annie's birth was to photographically record a normal goat birth, then create an educational article for my goat website. Ah, plans . . . It all started out great yesterday, as it appeared Annie was progressing slowly and predictably. Her tail ligaments were gone in the morning. (Note to self: take a picture of how to check for tail ligaments next time.) And she was acting like a goat in early labor. She wasn't very interested in food. She stuck next to me like glue. She got upset when I left. But she was happy, so I knew nothing was imminent. 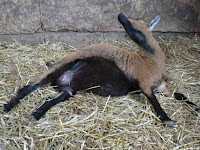 Here's Annie sort of thinking about this pushing thing, but not seriously, because she's quiet, and she only did it every hour or so. She wasn't screaming, so even though this is not a normal goat posture, she wasn't upset.

After spending a few hours with her at different times throughout the day, I went to the garden and picked mustard greens for dinner. 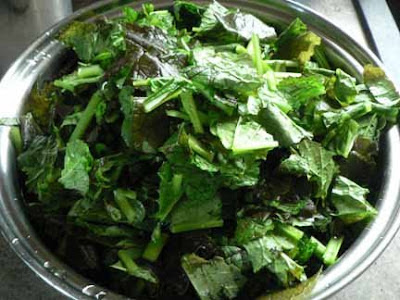 Then I decided to have some goat yogurt with homemade peach preserves swirled through it at 5:45 since I knew dinner wouldn't be ready for another hour, and I was starving. 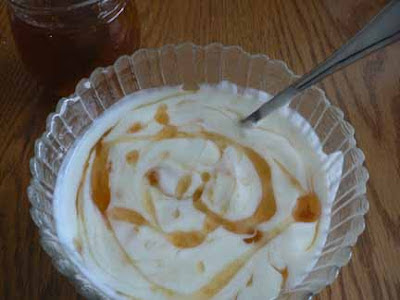 When I went out to the barn for one final check on Annie before devoting myself to dinner preparation, it was obvious that Annie was not terribly happy anymore. 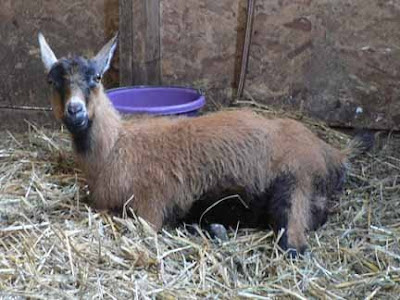 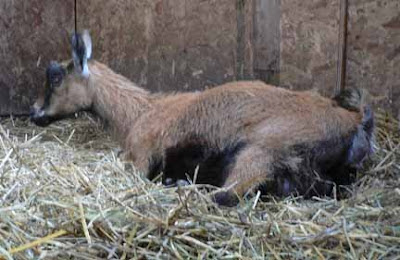 If you've ever given birth, you can relate to this picture. I always feel sorry for first fresheners. They have no idea what's going on. 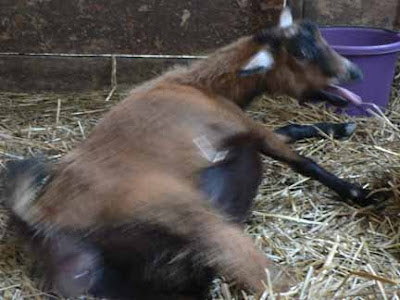 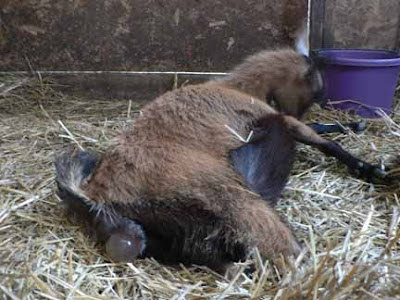 As you can see from the picture below, there are two distinct bags of water sticking out. When I first noticed that, I was amused. "Look at that, Katherine! It's a double bubble." She stopped taking pictures. "Uh, Mom, it's two separate sacs. It's two kids." When that thought registered, I reached down and slipped my finger between the two bags. There were hard things -- babies -- in each sac, right there, wanting to be born now! With my fingers between the two bags, I felt the parts of each baby, trying to visualize what I was feeling. The top one was definitely two hooves and a head, which is perfect. I wasn't completely sure what I was feeling on the other one, so I decided that the one who was lined up perfectly would be first. 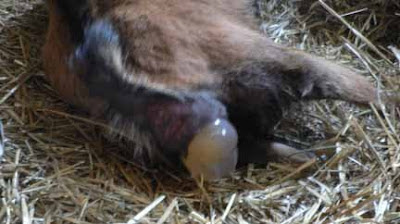 I held back one kid while the other one was born. I was surprised at how hard it was to hold back that second kid, and a flash of panic went through my mind -- what if they're Siamese twins! Lucky for me, the first one came out before I had time to panic too much about that possibility. 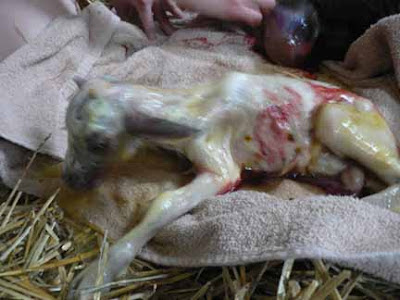 The second kid just sort of fell out before we even had the head cleaned off on the first one. 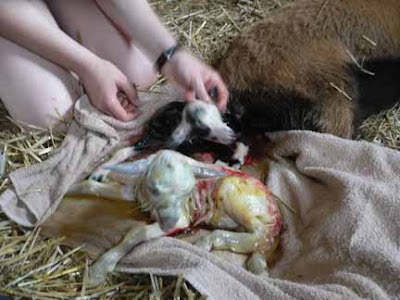 And here are the two dry, fluffy kids a couple hours later. The black and white one is a doeling, and the cream one is a buckling. 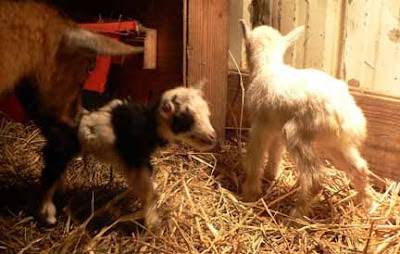 I still want to create a photographic article about normal goat birth, but I guess this just wasn't meant to be the time. I took 94 pictures yesterday, and only six of them were pictures of food. Annie and her kids were the subject of the other 88. Unfortunately, I have no pictures at all of the kids actually being born.

Charlotte's ligaments are gone today, but I'm not holding out a lot of hope that I'll get any pictures of her birth, even though she is a first freshener like Annie. Charlotte is one of Sherri's girls, and kids just fly out of them. In fact, Sherri has always had triplets or quads, and the only reason I have to be there is because she can't clean them off fast enough. Her daughter, Shirley, almost died from hypothermia, because no one was there when she was born. So, whenever Sherri is due, I am always worried about being there. What has happened every year since the Shirley incident is that Sherri goes into labor in the middle of the night when no one is around, and she does not make one single sound until the head is actually emerging, at which point I fly out of bed, pull on the clothes that were waiting for the moment, and I go running to the barn to hear a kid screaming as I head towards the stall with my armful of towels. Her daughters, Shirley and Anne, have already proven to have their mom's talent for kidding, and I expect nothing less from Charlotte.
Posted by Deborah Niemann at 12:14 PM