It all started on Tuesday morning as I was pulling into the parking lot of the Illinois Farm Bureau for the board meeting of the Illinois Specialty Growers Association of which I'm a board member. My cell phone rang. It was Jane telling me that Katy was laying down in the pasture, unable to stand. I suggested that she check her eyelids, and if they were pale to give her a dewormer. I checked in a couple of hours later and learned that they had given her a dewormer and also took her hay and a bucket of warm water. She was eating and drinking but still could not stand.

When I got home Tuesday at sundown, I checked on her. She still was not standing, and although she was eating a little bit, she was not drinking. Mike checked on her first thing Wednesday morning, and she was still not standing, so I called the University of Illinois vet clinic, and they said that we could bring her in. The only problem, I explained, was that she was at the bottom of a hill in an area that was completely inaccessible by vehicle. How would we ever get her into a trailer? 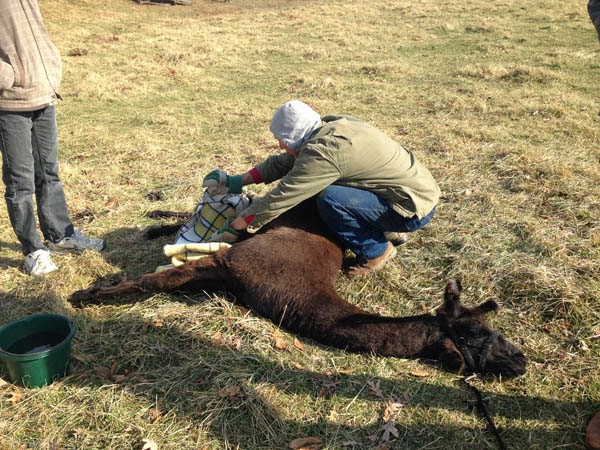 The vet professor said that we could use a blanket as a sling to put it under her body, and that once we had her on her feet, she might actually be able to walk a little. So, when we were done with morning chores, Mike, Jane, Jonathan, and I went out there with a blanket and two halters -- one for Katy and one for her little cria Oscar, who is not even four months old yet, so still needs his mama.

Oscar had never had a halter on him prior to that, and he was not happy about it. First we tried a sheep halter, and he went completely nuts, twisting and jumping into the air, spinning around like a whirling dervish. The sheep halter slipped over his nose bridge and started to cut off his air, so I ran to the barn to get the smallest llama halter that we have. I didn't try it initially because I thought it would be too big, but it actually fit pretty well. He was still not impressed, however, so Mike simply picked him up and carried him into the barn to wait for his mama. 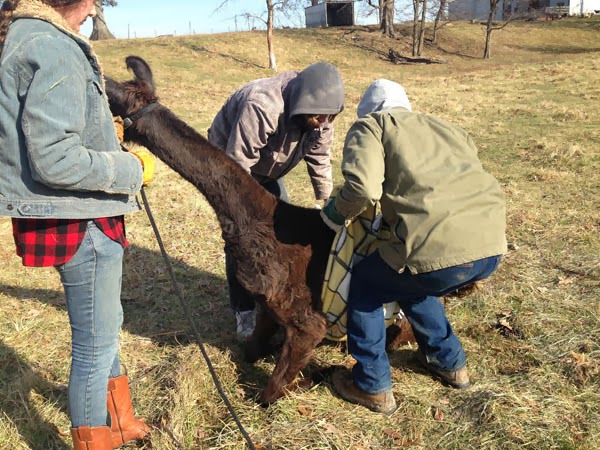 We rocked Katy side to side and got the blanket under her, then the four of us lifted her to her feet. (I snapped this picture as Mike and Jonathan came to the conclusion that Jane and I needed to help.) 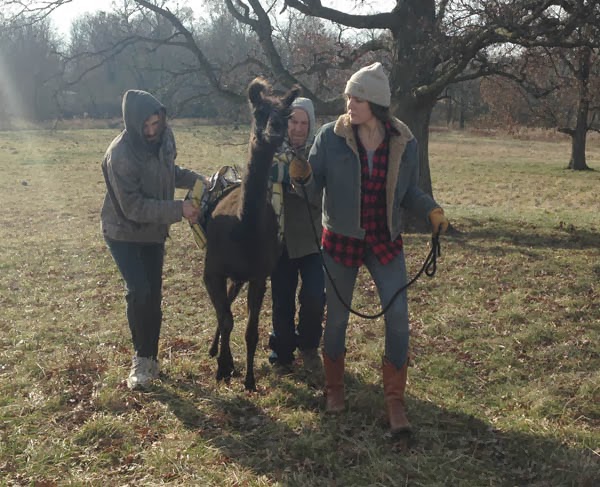 We were very happy that she was indeed able to walk a little. She had trouble with her back feet, crossing them sometimes, which you can see in the picture above. 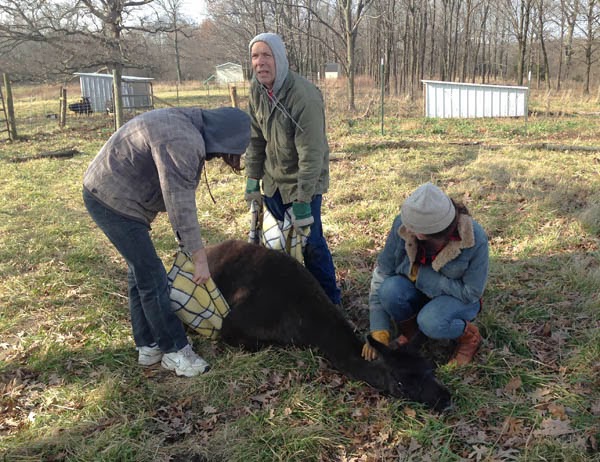 She went down completely one time about halfway to the trailer, and once we got her up again, we all tried really hard to keep her on her feet, as getting her up was the hardest part. As she went past the stall where we'd left Oscar, he completely forgot his disdain for humans and was pressing against me to get to his mama, which made leading him to the trailer a piece of cake, as he was simply following her.

After getting them into the trailer, Jane and I went into the house, grabbed a quick bite to eat, and we were on the road to the U of I vet clinic, which is normally a two-hour drive. I'd forgotten how much pulling the trailer can slow you down, so it was a little longer. Once we arrived, it took the vets and techs 15-20 minutes to get her out of the trailer. Oscar was very upset by the whole thing and spent more time spinning and jumping around in the parking lot. The poor little guy has only seen about five human beings in his whole short life, and suddenly he was surrounded by more than a dozen, but Jane did a good job keeping him from getting too wild.

Everyone finally gave up on getting Katy to stand up, and finally six or seven people pushed and pulled and slid her out of the trailer and onto a cart. They wheeled her into the clinic, and Jane led Oscar while someone else was attempting to move him by pulling on his tail, which I've never seen anyone do with a camelid, although I know people do that with cattle a lot. It didn't seem to work at all, and I'm not sure why I didn't say anything or offer to just tap Oscar gently on the back of his legs, which is how we normally train llamas to lead. 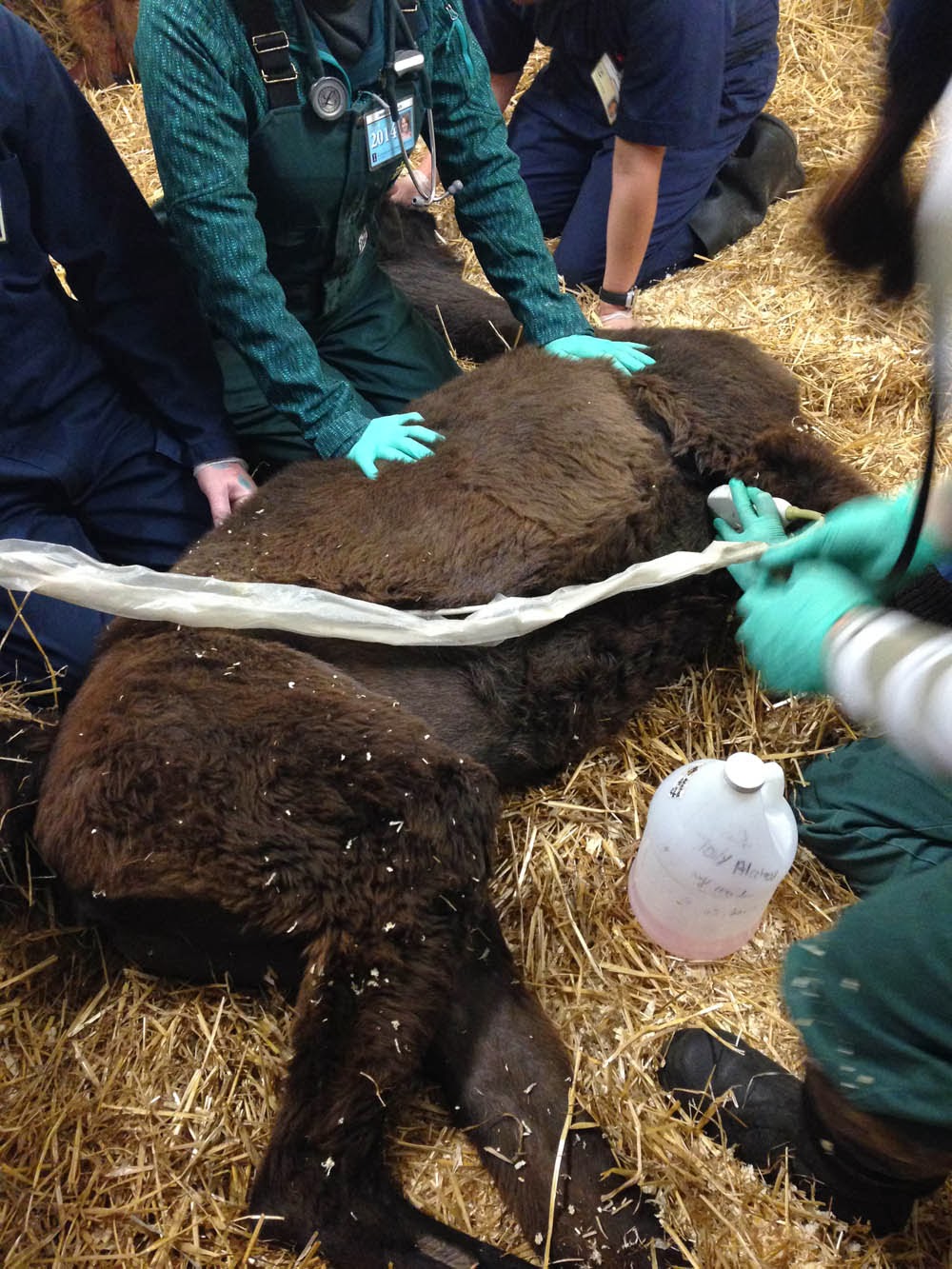 I'm not sure how we wound up with a professor, two residents, an intern, and a dozen students, but things happened very quickly. At least six tubes of blood were drawn and sent to the lab, then they did a complete abdominal ultrasound and even got an imaging specialist with whom to confer. There were lots of white spots all over Katy's liver, and although that was not normal, it did not explain her symptoms. They poked and pinched her in various places and discovered that she had very little feeling on the right side of her body. Blood results began to trickle in with some results that were not terribly surprising, such as, she was dehydrated. Another blood test looked like she was fighting an infection and that she might have a parasite problem. Ultimately a spinal tap confirmed a diagnosis of meningeal worm. One of the students showed us the spinal fluid, which was cloudy. It should have been clear enough to read through. The fluid was sent to the lab, and about 90 minutes later, at 6 p.m., as we were already driving home, we got the phone call with the confirmation. Yes, it was meningeal worm.

Katy will be in the intensive care unit for five days of treatment. It sounds scary. The resident said that she could have seizures, but they would be ready to handle that, if it happens. She will need massive doses of dewormer, as well as anti-inflammatory drugs, which could cause ulcers, but they know that and will treat accordingly. Oscar is staying with her so that he can continue to nurse as much as possible -- and also keep her stress level down. 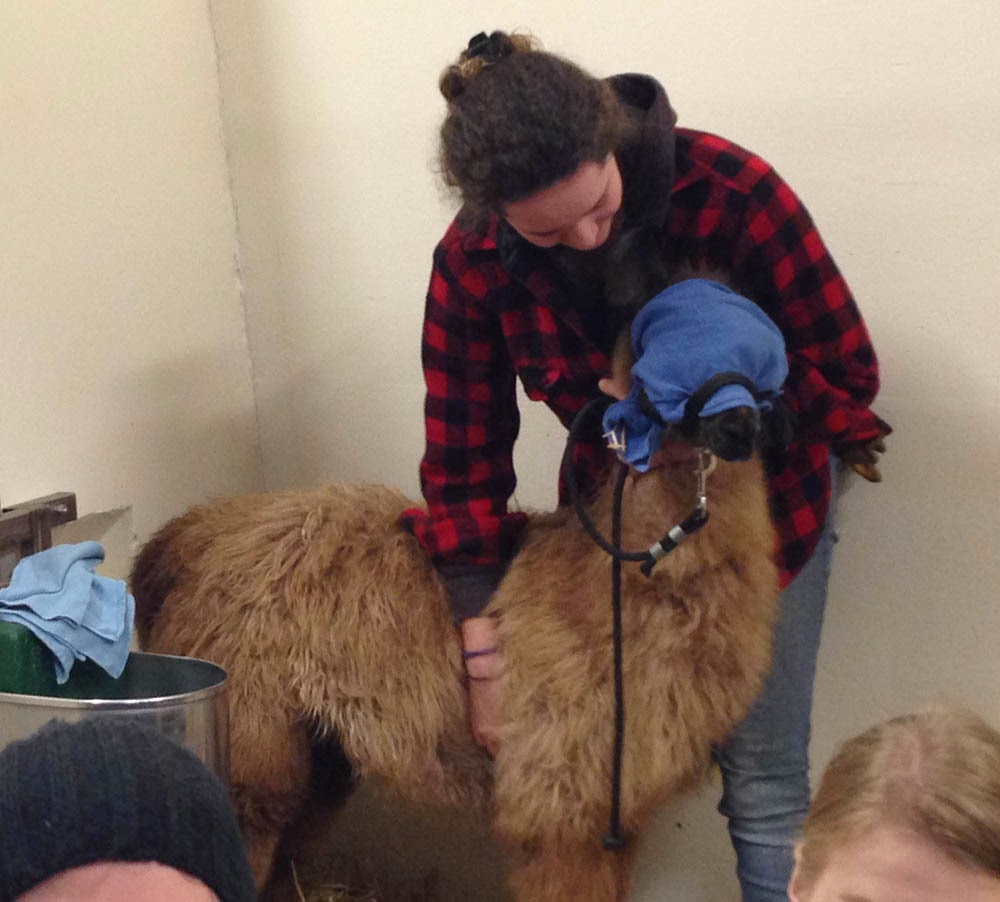 Oscar actually continued to be a challenge after we got into the clinic and they began examining Katy. He was jumping up and down a lot, even when he was allowed to be right next to his mama's face. First they tried putting a blindfold on him, as that generally helps llamas to calm down, but it didn't work with little Oscar. So, they then asked if it was okay to give him a mild sedative because they were worried that he might hurt himself or Katy by jumping on her head or neck. I agreed, and the sedative did certainly calm him down for about half an hour. He laid down with his head next to his mama's and seemed very content. Even when he became more alert again half an hour later, he remained calm.

As for how the llama got the meningeal worms -- we can blame the white-tail deer, which frequently visit our farm. They are the normal host for the meningeal worm. They poop out the eggs, which are then ingested by slugs and snails, and then llamas accidentally ingest the slugs or snails when eating grass. Some researchers say that they don't even have to ingest the actual slug or snail; they think that the eggs may be in the slime trail left by slugs and snails. Although goats can also get infected by meningeal worm, it is far less common than llamas and alpacas.

The resident in charge of Katy and Oscar called me a few minutes ago with an update. She said that Katy's condition has actually worsened. The paralysis, which was mostly evident in her hind legs and right side yesterday is growing. Her front legs are becoming less responsive, as well as her tail. The resident said that it may still be reversible though, and she asked for the OK to increase the anti-inflammatory drugs. As the worms die in her spinal column, they may be causing increased inflammation, which is what has caused the paralysis to spread ... at least that's the theory.

Although Katy appears to still be making milk, and Oscar has been helping himself as much as possible, they are concerned that he isn't getting enough, so she also asked for permission to begin giving him a bottle with goat milk. Of course, I said yes. In addition to making sure that the little guy doesn't go hungry, I also like the idea of them teaching him to take a bottle, rather than me, in case Katy doesn't make it. I know how hard it is to switch a goat from mama to a bottle, so I can't even imagine what it will be like with a cria that is probably 60 or 70 pounds!

Now, we just wait, hope, and pray.
Posted by Deborah Niemann at 3:08 PM

Saying a payer for everyone, human and animal.