A second night of frustration and sadness 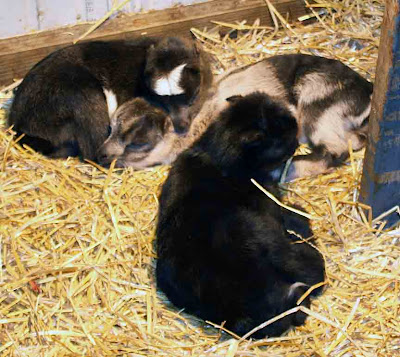 Margaret arrived yesterday morning with the antibiotics, calcium supplement, and thermometer. By that time, I had already figured out that Viola was definitely suffering from hypocalcemia, which is often called "milk fever." About eleven o'clock, I started injecting 50 cc of calcium into Viola. One of the things I had read said that she should receive more injections an hour later, but by then, the goat would be feeling so much better, she would be a challenge to inject. Another thing I read simply said to do three separate series of injections the first day, so I decided to sort of split the difference and do the second series of injections after a few hours.

A few hours later, Viola was not fighting me. In fact, I really did not see any improvement in her at all. Everything I'd read made it sound like treating milk fever was quite simple. Although some sources mentioned that death was possible, it was usually mentioned in the same sentence as, "if left untreated," which was not the case. I also didn't read anything that said to call the vet immediately if the doe doesn't respond within an hour to the calcium injections. It was close to three o'clock, and I started to think that I should call the U of I vet clinic, but it was very clear that Lizzie was going to kid soon, and I couldn't leave her. The vet clinic would probably tell me to bring her in, but I couldn't leave Lizzie alone.

It also occurred to me that I had no idea how I could take her in. I didn't know how I would get her into a crate to put her on the back of the pick-up, which wouldn't be appropriate anyway because it would be freezing back there -- the temperature was in the 20s. The trailer had issues, which left me with the option of using my car, and I'd have to somehow lift her into the car because she certainly couldn't jump. As my brain tried to work this out, I was reminded that Lizzie was going to kid soon, making the whole conversation in my head pointless. I decided to do another series of calcium injections. When doing calcium injections sub-q, you are supposed to split them up into 10 cc injections in various parts of the body. I had just done the second injection when laboring Lizzie screamed and pushed so hard, she almost flipped herself onto her back. I decided that the rest of the injections could wait, so I moved to Lizzie's pen.

An hour later, Lizzie finally kidded -- which I'll tell you about tomorrow -- and of course, it took time to get the kids cleaned up. The colder it is, the longer it takes to get kids dry, even with a blow dryer. It amazes me how you can think a kid is dry, but when you pet them ten minutes later, they feel wet again.

It was almost six o'clock by the time I could think about Viola again. I injected the rest of the calcium and went into the house for dinner. I also pulled out my goat books and read everything I could find in them and online about hypocalcemia. The advice was almost identical from one source to another -- calcium injections. A friend posted my dilemma on a natural care goat group, and suggestions from a variety of people started to come in. I decided to give Viola an oral calcium drench in addition to the injectable, and I made an infusion of a variety of herbs that someone recommended. Although we'd had a heat lamp on her, I decided to cut the arms off of an old sweatshirt and put it on her to help keep her warm. Her body temperature was dropping, which usually means an animal's body is shutting down and they are about to die. However, I continued to hold out hope because everything written on hypocalcemia says that lowered body temperature is a typical symptom.

In the midst of all my reading, I realized that Viola had a symptom of hypocalcemia when she was in labor -- she was shivering, and it was only 45 degrees that day. I knew she shouldn't be shivering on such a warm day, but I didn't realize it was the first symptom of milk fever. The only goats I had ever seen shiver in the past were goats that were giving birth when the temperature was below zero. I began to worry that we had started treatment too late.

After heading back out to the barn, I gave Viola the oral calcium drench and the warm infusion of herbs that I had made. She seemed to enjoy the herbs. Maybe it was just the warmth of the infusion that she liked, but she didn't try to move her head away as I used a drench syringe to squirt it into her mouth. I sat with her and hugged her as her babies jumped all over both of us. I wish she could have told me if she wanted the kids around or not. I thought about moving them to another pen, but I was afraid that would upset her. It wasn't very long before she started to moan. It sounded so terribly human, like a person in pain. I thought about calling the vet clinic's emergency number. Mike would be home any minute and could help me put her into my car, but another part of my brain said it was too late.

A half hour later, she was dead. Her babies were curled up next to her. I didn't have the heart to disturb them. A dozen questions went through my head -- questions about Viola and milk fever and my own thought process -- and I felt horribly guilty. We took Viola's body to the university vet clinic today for a necropsy. It felt so backwards. She should have been there yesterday when she was still alive, when they could have still helped her. It felt so ridiculous giving her history to a vet when she was already dead. But I have to know what went wrong. If we learn nothing from this, then Viola's death would be completely in vain. And that would be even more tragic.
Posted by Deborah Niemann at 8:15 PM

I'm so so sorry, Deborah!! I hope you get good answers.

I'm so sorry for your loss. What a horrible experience. And now you have three bottle babies! Oh my...

I so enjoyed reading about Viola's big surprise. So this post has me disheartened. I will look forward to reading about the vet's report so that we may all learn from this sad experience.

So, so sorry Deborah. Take solace in the fact you did everything you could. I don't know what else could've been done.

Gosh, Deborah! I'm so sorry...you are a far braver woman than I, I think I would be a disaster having gone through this sort of tragedy for several days.

Farmers are tough folks. I highly respect you and send hugs and warm thoughts to you!

:( As always, I've learned a lot, but I'm terribly sorry that you had to go through all that. What an awesome responsibility it is to care for these lovely creatures, and what a huge learning curve! Peace to you, Deborah.

Really sorry to hear that, Deborah. *hugs*
Don't be too hard on yourself. I don't think I would have been as prepared as you are.

Will any of the other goats that kidded be able to help you feed the kids?

Thank you all for your condolences. Results from the gross necropsy say that Viola also had pneumonia, which is frustrating because she didn't have any obvious symptoms like a cough, but the vet said that a lack of obvious pneumonia symptoms is typical in adults, so it can be tough to diagnose.

LindaG - I never would have thought that Jo's situation could be a blessing, but she's a very heavy milker and now only has the one doe to feed, so she is helping to feed the triplets. We also have some milk in the freezer, which was going to be used for soap, but will now be used to feed the babies.

I'm so sorry to hear about your loss.

Take heart. You did the very best you could do. We have had sheep die even when we had the vet come out and administer meds. Sometimes there is really nothing that can be done.

I'm glad you posted the conclusion of the necropsy, so that we can all learn from this. I am still trying to learn all I can before I buy... and this, while very sad, has also been helpful.

So sorry to hear this. Keeping livestock is hard sometimes. At least you know that it wasn't mismanagement of Milk-Fever. Pneumonia is a dreaded word to all who keep animals xx

I am so sorry that you went thru this experience but I hope there is some comfort in knowing that your efforts to learn what happened has been a good learning resource for others. We lost some beloved pets to rhododendron posioning and my daughter was hysterical saying "how can you keep doing this?" I had to ask that myself after feeling shell shocked from that experience but somehow we persevere. I hoe your new babies thrive and the next births go better.

Sorry to hear about your loss.
Kim

So sorry to read about your Viola. Hope you find out the problem so that you feel better prepared next time...I know you are sad...